The ‘Cordoba Initiative’ has announced plans to build a $100-million plus mosque overlooking Ground Zero at the World Trade Center. Its leader, Imam Feisal Abdul Rauf, says it “will serve as the platform to launch a broader vision of Muslim-West harmony and interdependence.” As he has made clear, Rauf supports supplementing our Constitution by making sharia law optional — optional at least for now — for Muslims living here in America. Debra Burlingame and Robert Spencer discussed this last night on-air with Sean Hannity:

Before their sparing any semblance of investigative reporting, the editors at the New York Daily News expressed their support this morning for a Muslim “cultural center” within Ground Zero’s kill zone. Missing from their editorial is an explanation of Rauf repeatedly stating “300 Muslims were killed on 9/11.” To be fair, even they dispute his saying “This is not a mosque.”

“A plan to build a mosque and Muslim cultural center two blocks from Ground Zero has unleashed a virulent and un-American wave of religious intolerance. As a fundamental matter of principle, houses of worship are welcome in New York. Whether they be churches, synagogues, temples or mosques, whether they be modest storefronts or soaring cathedrals, they have a home here. Islam included – and even downtown. There is no doubt that many in this country distrust the religion that was twisted malignantly into the force behind 9/11. And some, in blind ignorance, hate. Among those are Mark Williams, the Tea Party leader, who attacked the concept of a mosque near Ground Zero by describing Islam and the Prophet Muhammed in the most repugnant terms. … A new 13-story building, named Cordoba House, would include a mosque, classrooms, a fitness center and pool, as well as a theater. It was modeled after the 92nd St. Y, which has both a community center and prayer space. … In fact, Cordoba House is two blocks away. Had it been closer, the point would be the same: All religions have equal rights.”

The news side of the News might try looking into whether Rauf agrees with their editors. They would soon discover that, to his way of thinking, one religion is more equal than others. Here is Imam Feisal Abdul Rauf, in his own words, after Christian churches were firebombed and angry protests took place in Malaysia this past January:

“Most recently that anger has surfaced in Malaysia, where 60% of the people are Malays. The High Court’s ruling that Allah is not exclusive to Muslims led to the fire bombing of some churches and protests among Malays, who fear Catholics are trying to manipulate the word to win Malay converts. This should not be. Islam and Christianity are at their roots religions of peace and tolerance. A certain amount of competition will always exist among religions. Good competition is to compete in good works. Bad competition is trying to undermine the other faith. To live harmoniously in that competition requires everyone to understand the consequences of their actions. My message to the Christian community in Malaysia is that using the word Allah to mean the Christian God may be theologically and legally correct, but in the context of Malaysia, it is socially provocative.”

So, regardless of the laws of that land, Imam Rauf believes the minority Christians in Malaysia brought the attacks upon themselves. (Concerning 9/11 and provocation, back in 2001 Rauf told 60 Minutes, “[U.S.] policies were an accessory to the crime that happened.”) Rauf ended his advice with an inside glimpse of his “broader vision” for America:

“Our model should be the Prophet Muhammad when he worshipped [sic] in Mecca before Islam had taken hold. He did not pray the noon and afternoon prayers in a loud voice lest that would incite anger of the unbelievers.”

Frankly, we have not read and do not care what Mark Williams allegedly said or wrote; what the News’ problem is with him is their problem, not ours.

What I and many others are opposed to is a sharia-compliant anything — mosque, prayer center, or cultural center — anywhere within sight or sound of where sharia-compliant Muslims destroyed 2,752 people and took away their equal rights forever, including the rights and lives of 22 (non-hijacker) innocent Muslims. 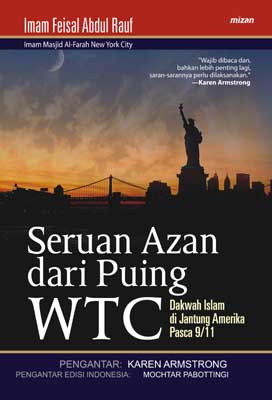 The original Malaysian title for Imam Rauf’s book was ‘A Call to Prayer from the World Trade Center Rubble: Islamic Da’wah From the Heart of America Post-9/11’. Robert Spencer explains:

“Da’wah is Islamic proselytizing. And in the Islamic law, da’wah precedes jihad. You call the nonbelievers to Islam. And if they refuse to accept it, then you initiate the jihad against them. But the whole goal of both da’wah and jihad is to impose Islamic law or Sharia upon the nonbelievers as a political system, not as a religious one.”

The full Community Board 1 of lower Manhattan will meet at 6 PM on May 25, 2010, at the Three-Legged Dog (a theater group’s headquarters) at 80 Greenwich Street to review and vote on the plans for the ‘Cordoba House.’