In February I was among a group of USS Cole and 9/11 victims’ families who met with the president at the White House to discuss his policies regarding Guantanamo detainees. Although many of us strongly opposed Barack Obama’s decision to close the detention center and suspend all military commissions, the families of the 17 sailors killed in the 2000 attack in Yemen were particularly outraged.

Over the years, the Cole families have seen justice abandoned by the Clinton administration and overshadowed by the need of the Bush administration to gather intelligence after 9/11. They have watched in frustration as the president of Yemen refused extradition for the Cole bombers.

Now, after more than eight years of waiting, Mr. Obama was stopping the trial of Abu Rahim al-Nashiri, the only individual to be held accountable for the bombing in a U.S. court. Patience finally gave out. The families were giving angry interviews, slamming the new president just days after he was sworn in.

The Obama team quickly put together a meeting at the White House to get the situation under control. Individuals representing “a diversity of views” were invited to attend and express their concerns.

On Feb. 6, the president arrived in the Roosevelt Room to a standing though subdued ovation from some 40 family members. With a White House photographer in his wake, Mr. Obama greeted family members one at a time and offered brief remarks that were full of platitudes (“you are the conscience of the country,” “my highest duty as president is to protect the American people,” “we will seek swift and certain justice“). Glossing over the legal complexities, he gave a vague summary of the detainee cases and why he chose to suspend them, focusing mostly on the need for speed and finality.

Many family members pressed for Guantanamo to remain open and for the military commissions to go forward. Mr. Obama allowed that the detention center had been unfairly confused with Abu Ghraib, but when asked why he wouldn’t rehabilitate its image rather than shut it down, he silently shrugged. Next question.

Mr. Obama was urged to consult with prosecutors who have actually tried terrorism cases and warned that bringing unlawful combatants into the federal courts would mean giving our enemies classified intelligence — as occurred in the cases of the al Qaeda cell that carried out the 1993 World Trade Center bombing and conspired to bomb New York City landmarks with ringleader Omar Abdel Rahman, the “Blind Sheikh.” In the Rahman case, a list of 200 unindicted co-conspirators given to the defense — they were entitled to information material to their defense — was in Osama bin Laden’s hands within hours. It told al Qaeda who among them was known to us, and who wasn’t.

Mr. Obama responded flatly, “I’m the one who sees that intelligence. I don’t want them to have it, either. We don’t have to give it to them.”

How could anyone be unhappy with such an answer? Or so churlish as to ask follow-up questions in such a forum? I and others were reassured, if cautiously so.

News reports described the meeting as a touching and powerful coming together of the president and these long-suffering families. Mr. Obama had won over even those who opposed his decision to close Gitmo by assuaging their fears that the review of some 245 current detainees would result in dangerous jihadists being set free. “I did not vote for the man, but the way he talks to you, you can’t help but believe in him,” said John Clodfelter to the New York Times. His son, Kenneth, was killed in the Cole bombing. “[Mr. Obama] left me with a very positive feeling that he’s going to get this done right.”

“This isn’t goodbye,” said the president, signing autographs and posing for pictures before leaving for his next appointment, “this is hello.” His national security staff would have an open-door policy.

Binyam Mohamed — the al Qaeda operative selected by Khalid Sheikh Mohammed (KSM) for a catastrophic post-9/11 attack with co-conspirator Jose Padilla — was released 17 days later. In a follow-up conference call, the White House liaison to 9/11 and Cole families refused to answer questions about the circumstances surrounding the decision to repatriate Mohamed, including whether he would be freed in Great Britain.

The phrase “swift and certain justice” had been used by top presidential adviser David Axelrod in an interview prior to our meeting with the president. “Swift and certain justice” figured prominently in the White House press release issued before we had time to surrender our White House security passes. “At best, he manipulated the families,” Kirk Lippold, commanding officer of the USS Cole at the time of the attack and the leader of the Cole families group, told me recently. “At worst, he misrepresented his true intentions.”

Last week, Attorney General Eric Holder told German reporters that 30 detainees had been cleared for release. This includes 17 Chinese fundamentalist Muslims, the Uighurs, some of whom admit to having been trained in al Qaeda and Taliban camps and being associated with the East Turkistan Islamic Party. This party is led by Abdul Haq, who threatened attacks on the 2008 Olympics Games in Beijing and was recently added [April 20, 2009] to the Treasury Department’s terrorist list. The Obama administration is considering releasing the Uighurs on U.S. soil, and it has suggested that taxpayers may have to provide them with welfare support. In a Senate hearing yesterday, Mr. Holder sidestepped lawmakers’ questions about releasing detainees into the U.S. who have received terrorist training.

What about the terrorists who may actually be tried? The Justice Department’s recent plea agreement with Ali Saleh al-Marri should be of grave concern to those who believe the Obama administration will vigorously prosecute terrorists in the federal court system.

Al-Marri was sent to the U.S. on Sept. 10, 2001, by KSM to carry out cyanide bomb attacks. He pled guilty to one count of “material support,” a charge reserved for facilitators rather than hard-core terrorists. He faces up to a 15-year sentence, but will be allowed to argue that the sentence should be satisfied by the seven years he has been in custody. This is the kind of thin “rule of law” victory that will invigorate rather than deter our enemies.

Given all the developments since our meeting with the president, it is now evident that his words to us bore no relation to his intended actions on national security policy and detainee issues. But the narrative about Mr. Obama’s successful meeting with 9/11 and Cole families has been written, and the press has moved on.

The Obama team has established a pattern that should be plain for all to see. When controversy erupts or legitimate policy differences are presented by well-meaning people, send out the celebrity president to flatter and charm.

Most recently, Mr. Obama appeared at the CIA after demoralizing the agency with the declassification and release of memos containing sensitive information on CIA interrogations. He appealed to moral vanity by saying that fighting a war against fanatic barbarians “with one hand tied behind your back” is being on “the better side of history,” even though innocent lives are put at risk. He promised the assembled staff and analysts that if they keep applying themselves, they won’t be personally marked for career-destroying sanctions or criminal prosecutions, even as disbelieving counterterrorism professionals — the field operatives and their foreign partners — shut down critical operations for fear of public disclosure and political retribution in the never-ending Beltway soap opera called Capitol Hill.

It worked: On television, his speech looked like a campaign rally, with people jumping up and down, cheering. Meanwhile, the media have moved on, even as they continue to recklessly and irresponsibly use the word “torture” in their stories. 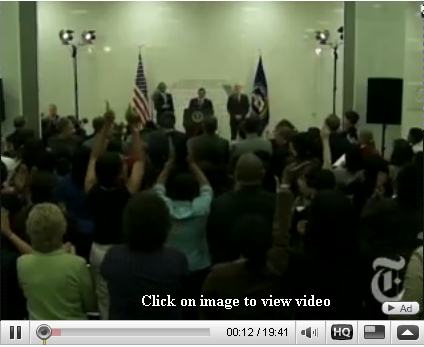 I asked Cmdr. Kirk Lippold why some of the Cole families declined the invitation to meet with Barack Obama at the White House.

“They saw it for what it was.”

Debra Burlingame, a former attorney and a director of the National September 11 Memorial Foundation, is the sister of Charles F. “Chic” Burlingame III, the pilot of American Airlines flight 77, which was crashed into the Pentagon on Sept. 11, 2001, and the co-founder of 9/11 Families for a Safe & Strong America.

This commentary by her appeared today on the opinion page of the Wall Street Journal. The supporting links and video only appear here.

Fri May 08, 2009 10:15 ‘Red Fred‘ said: “Mr. Obama responded flatly, ‘I’m the one who sees that intelligence. I don’t want them to have it, either. We don’t have to give it to them.’ Well case closed. He can withhold whatever information from defense he darn well pleases. Mr. Constitutional scholar strikes again.”

Incidents of uncooperative and beligerent behavior by Gitmo detainees towards military personnel have risen sharply since December. Several defense lawyers are suspected to have suggested to their clients to “pass the word” to gradually increase assaults, verbal abuse, and hunger strikes in an effort to pressure President Barck Obama into making good on his campaign promise to close the detention facilities at Guantanamo Bay.

An investigation into this allegation is unlikely as lawyer-client conversations are not audibly monitored due to legal privilege.

A source close to a well-known legal defense group said, “They are hoping for one ‘Abu Ghraib’ moment, a single incident where a guard is charged after striking back. It is believed that is all it will take to seal the deal, for Gitmo to surely close.”

Recent press reports have been ripe with defense lawyers quoted as saying their clients had been assaulted by guards and medical personnel from as far back as seven years ago and, more recently, detainees beaten who resisted force feedings. So far, none of those reports has provided a single piece of evidence to back up their claims.

The source explained, “The world was an easy sell; ‘hate America’ campaigns overseas have been around for decades. The lawyers need only allege something and the press will report it. This is a battle for the hearts and minds of America that its military is nearing a state of open revolt.”

One news report today seems to bear out the source’s statements:

LONDON (Reuters) — Abuse of prisoners at Guantanamo Bay has worsened sharply since President Barack Obama took office as prison guards “get their kicks in” before the camp is closed, according to a lawyer who represents detainees.

Abuses began to pick up in December after Obama was elected, human rights lawyer Ahmed Ghappour told Reuters. He cited beatings, the dislocation of limbs, spraying of pepper spray into closed cells, applying pepper spray to toilet paper and over-forcefeeding detainees who are on hunger strike.

The Pentagon said on Monday that it had received renewed reports of prisoner abuse during a recent review of conditions at Guantanamo, but had concluded that all prisoners were being kept in accordance with the Geneva Conventions.

“According to my clients, there has been a ramping up in abuse since President Obama was inaugurated,” said Ghappour, a British-American lawyer with Reprieve, a legal charity that represents 31 detainees at Guantanamo.

“If one was to use one’s imagination, (one) could say that these traumatized, and for lack of a better word barbaric, guards were just basically trying to get their kicks in right now for fear that they won’t be able to later,” he said.

“Certainly in my experience there have been many, many more reported incidents of abuse since the inauguration,” added Ghappour, who has visited Guantanamo six times since late September and based his comments on his own observations and conversations with both prisoners and guards.

He stressed the mistreatment did not appear to be directed from above, but was an initiative undertaken by frustrated U.S. army and navy jailers on the ground. It did not seem to be a reaction against the election of Obama, a Democrat who has pledged to close the prison camp within a year, but rather a realization that there was little time remaining before the last 241 detainees, all Muslim, are released.