In 2004, the FBI raided a house and found a trove of evidence on the Muslim Brotherhood’s plan to Islamacize America including their master plan: ‘An Explanatory Memorandum on the General Strategic Goal for the Brotherhood in North America’. Is the Cordoba House that Imam Feisel Abdul Rauf has planned to overlook Ground Zero a Muslim Brotherhood operation?

Rauf speaks of dialogue here and building bridges to the Muslim World while openly stating he will use that place, Ground Zero, and 9/11 to proselytize. Indeed; the original Malaysian title for his book was ‘A Call to Prayer from the World Trade Center Rubble: Islamic Da’wah From the Heart of America Post-9/11‘ and da’wah is Islamic proselytizing. And in the Islamic law, da’wah precedes jihad.

Here are key excepts from ‘An Explanatory Memorandum on the General Strategic Goal for the Brotherhood in North America’ [all italicized emphasis added below are mine]. 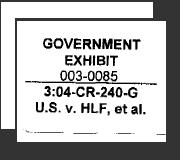 4- Understanding the role of the Muslim Brother in North America:

The process of settlement is a “Civilization-Jihadist Process” with all the word means. The Ikhwan [Arabic for ‘Muslim Brothers’] must understand that their work in America is a kind of grand Jihad in eliminating and destroying the Western civilization from within and “sabotaging” its miserable house by their hands and the hands of the believers so that it is eliminated and God’s religion is made victorious over all other religions. …

5- Understanding that we cannot perform the settlement mission by ourselves or away from people:

A mission as significant and as huge as the settlement mission needs magnificent and exhausting efforts. With their capabilities, human, financial and scientific resources, the Ikhwan will not be able to carry out this mission alone or away from people and he who believes that is wrong, and God knows best. As for the role of the Ikhwan, it is the initiative, pioneering, leadership, raising the banner and pushing people in that direction. They are then to work to employ, direct and unify Muslims’ efforts and powers for this process. In order to do that, we must possess a mastery of the art of “coalitions”, the art of “absorption” and the principles of “cooperation”.

Beginning on page 10 (and continued on page 11)

17- Understanding the role and the nature of work of “The Islamic Center” in every city with what achieves the goal of the process of settlement: [bold added theirs]

The center we seek is the one which constitutes the “axis” of our Movement, the “perimeter” of the circle of our work, our “balance center”, the “base” for our rise and our “Dar al-Arqam” to educate us, prepare us and supply our battalions in addition to being the “niche” of our prayers.

This is in order for the Islamic center to turn – in action not in words – into a seed “for a small Islamic society” which is a reflection and a mirror to our central organizations. The center ought to turn into a “beehive” which produces sweet honey. Thus, the Islamic center would turn into a place for study, family, battalion … the office of the domestic political resolution …

In brief we say: we would like for the Islamic center to become “The House of Dawa”‘ and “the general center” in deeds first before name. As much as we own and direct these centers at the continent level, we can say we are marching successfully towards the settlement of Dawa’ in this country.

Meaning that the “center’s” role should be the same as the “mosque’s” role during the time of God’s prophet, God’s prayers and peace be upon him, when he marched to “settle” the Dawa’ in its first generation in Madina. from the mosque [emphasis added mine]

Attachment number (1)
A list of our organizations and the organizations of our friends
[Imagine if t they all march according to one plan! ! !] [bold here and below added mine. Altogether, the document’s authors listed 29 organizations, plus 11 sources and media tools that should be within each ‘Islamic Teaching Center’]

READ IT YOURSELF (Note: this trial exhibit is in Arabic, and includes an English translation).

Note: With a tip of the hat and great appreciate to the Investigative Project on Terrorism.

1 comment for “Imam Feisel’s dawa; the evidence shows the ‘General Strategic Goal for the Muslims Brotherhood in North America’”