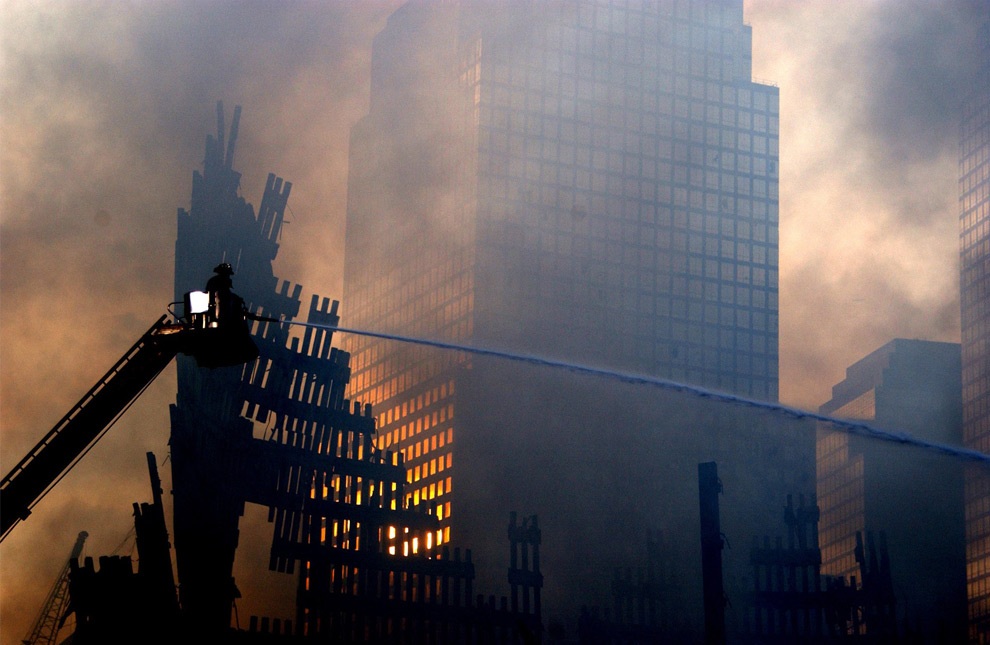 This is my op-ed as it appeared today in the Wall Street Journal, with additional photos and links added.

Debra Burlingame: The 9/11 Memorial Museum Held Hostage
The Port Authority of New York and New Jersey demands more money from a charitable foundation before it will finish construction.
By DEBRA BURLINGAME

Wednesday, May 30 marks 10 years since the recovery operation at the World Trade Center site officially ended. On that day, the “Last Column,” a 37-foot, 58-ton section of structural steel, was draped with an American flag and escorted from the site by an honor guard in a solemn ceremony that left grown men weeping.

The beam had become a sacred totem after the remains of three New York City firefighters from Squad 41 were found near its base. Recovery workers covered it with memorials to the dead: photographs, decals and hand-scrawled tributes: “FDNY 343,” “PAPD 37,” “NYPD 23,” the numbers of those killed from the city’s first responder departments.

During the recovery operation, ironworkers, heavy-equipment operators and others in the construction trades removed 1.8 million tons of twisted steel and concrete, heaped seven stories high; the Last Column’s silent, enduring presence was a solemn tribute to the best of humanity. It was brought back to the World Trade Center site in August 2009, where it will be viewed by millions when the National September 11 Memorial Museum opens. 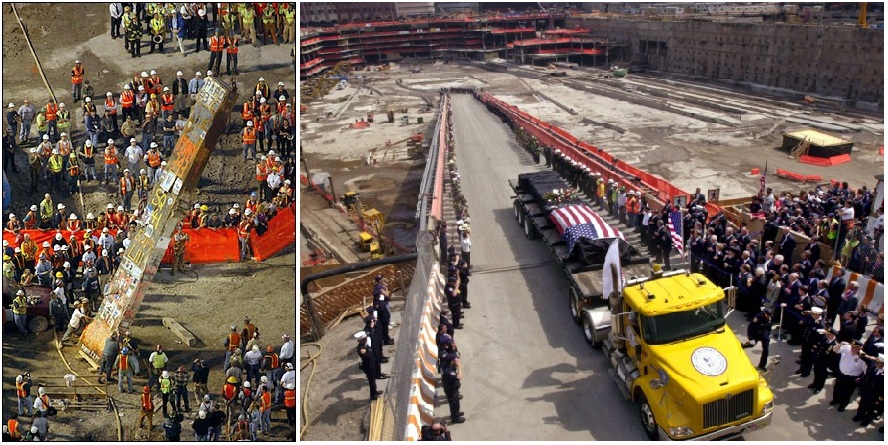 The ‘Last Column’ is removed from Ground Zero in a ceremony on May 2002. AP/Navy photo

Yet the museum opening, which was on track for Sept. 11, 2012, has now been delayed indefinitely. The final phase of construction ground to a halt last year in a public dispute over funding between the builder, the Port Authority of New York and New Jersey, and the nonprofit foundation that raised the money for the project. Lamentably, the two governors involved in this drama, New Jersey’s Chris Christie and New York’s Andrew Cuomo, have done nothing to stop the Port Authority’s shameless gambit to squeeze more money out of a charity to which 900,000 mostly small donors have contributed.

The Port Authority of New York and New Jersey is the bi-state agency that owns the land and lobbied heavily for the federally funded, multibillion-dollar job of rebuilding the 16-acre site. It claims that the National September 11 Memorial & Museum Foundation owes the agency $157 million more than the $530 million cost cap the agency itself agreed to in 2006. The Port Authority has not publicly stated any basis as to why it is owed additional money.

The Port Authority, run by a powerful group of politically connected bureaucrats, has long been accused of cronyism, mismanagement and waste. Last December, Gov. Christie announced that he was initiating a $2 million independent audit of the agency’s accounting. This came in the wake of a public outcry over the PA’s unilateral decision in August 2011 to raise bridge and tunnel tolls by 50%.

As Sen. Frank Lautenberg (D., N.J.) said, “There is something wrong when it costs $12 to cross a bridge in America.” He has joined Rep. Michael Grimm (R., N.Y.) in calling for federal oversight of the Authority “to make sure toll revenue is being used appropriately, and not going to fund excessive salaries or political patronage jobs.”

There are grounds for the charge. In November 2011, the Record newspaper in Bergen County, N.J., reported on the basis of public records that the Port Authority was giving 100 of its highest-paid employees secret bonuses totaling $2 million a year, beginning in 2008, at the height of the recession.

And in July, New York State Comptroller Thomas DiNapoli issued a scathing report revealing that the Port Authority paid $85 million in overtime costs to 5,360 of its 6,900 employees in 2010. Three hundred and forty-seven employees received more than 50% of their base salary in overtime. According to the report, in 2009 the agency spent $52 million on overtime, and the basis for the top overtime earners could not be supported with written records.

Mr. DiNapoli also noted that the Port Authority authorized $4.38 billion in service contracts from 2006 to 2009. In a random sample of 75 of those contracts valued at $1.3 billion, according to the report, the agency lacked written support for 57 of them, valued at $1.18 billion. The Port Authority’s in-your-face response to Mr. DiNapoli’s report was that the overtime business model works just fine.

Perhaps the most trenchant description of the Port Authority’s method of doing business was outlined in an Oct. 19, 2011, op-ed in the New York Post by the PA’s former executive director (1995-97), George J. Marlin. In an open letter of advice to Gov. Cuomo’s newly appointed executive director, Patrick Foye, Mr. Marlin urged Mr. Foye to reject Port Authority bureaucrats’ cost estimates and construction timetables on new projects. He said they are deliberately lowballed to get approval.

Once construction starts and millions are spent, Mr. Marlin said, subsequent cost “overruns” are the norm. He called the PATH train terminal at Ground Zero a “perfect example of PA staff conniving.” Originally estimated to cost $1.8 billion in federal money, the 800,000 square foot terminal has ballooned to an astronomical $3.4 billion and rising.

In January of this year, Gov. Cuomo raised the specter of a lawsuit by the Port Authority against the Memorial & Museum Foundation regarding its $157 million claim. The governor surely knows that litigating the dispute in court could entail years of delay, jacking up construction costs in excess of the amount that the agency is demanding.

In the meantime, millions of Americans would have to wait while a government agency pursued its extortionate demand through the courts. And this from the same governor who issued a commemorative “We Remember” flag to be flown statewide for the 10th anniversary of 9/11.

Yet this is the Port Authority way: Abrogate the contract, shut down work, then make an offer the other side can’t refuse. The foundation’s CEO, Joe Daniels, wants to resolve the dispute in a manner that moves the project forward. The 2006 contract provides for fast-track mediation. But Mr. Daniels told me that a Port Authority board member warned him in a heated telephone conversation last October, “Go ahead and do it [request mediation] that way and we’ll see how long it takes to get your museum built.”

The Port Authority should be reminded that this isn’t Mr. Daniels’s museum. It belongs to the public, funded in part by federal tax dollars appropriated by Congress to show the world that America isn’t beaten. It belongs to private donors who have supported the project because they believe that future generations should be taught about this attack on the country, and how it changed the world. 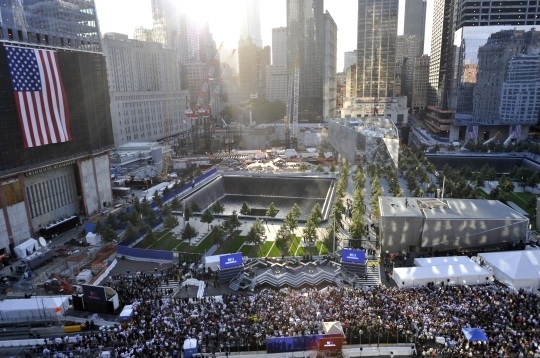 Govs. Christie and Cuomo have made significant strides confronting fiscal challenges in their respective states. It is time for them to exert leadership and direct their political appointees to fulfill the PA’s contractual obligations, restore the public trust and complete the construction of this vital national treasure.

Ms. Burlingame is a member of the board of directors of the National September 11 Memorial & Museum Foundation. Her brother, Charles F. Burlingame III, was the pilot of American Airlines flight 77, which was hijacked and crashed at the Pentagon on 9/11. 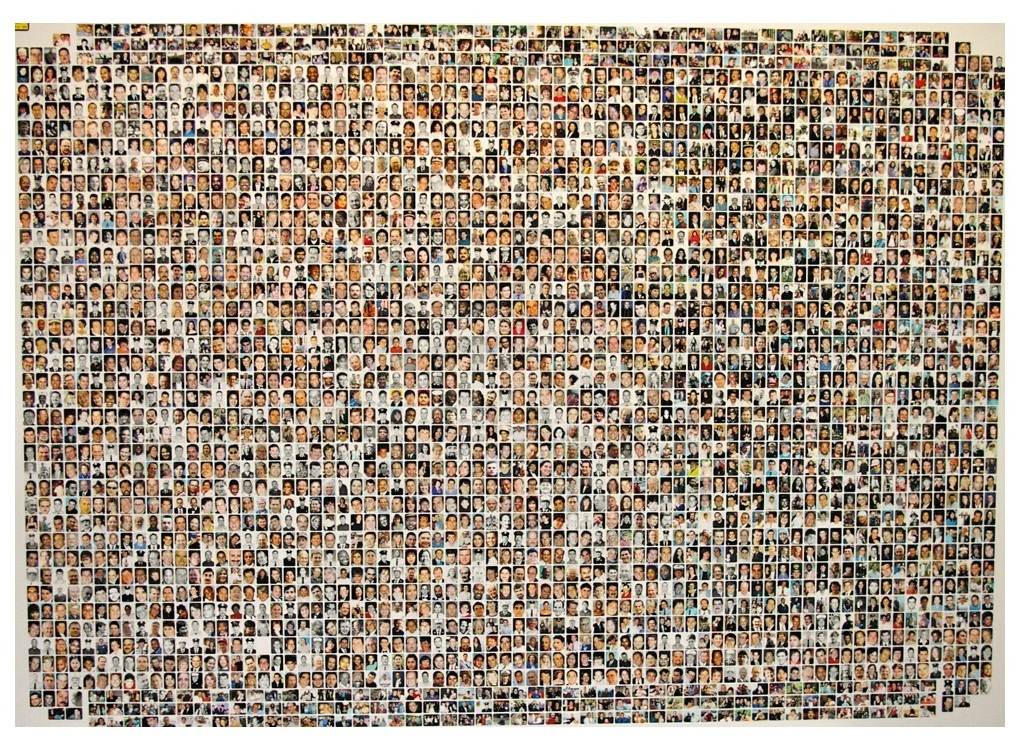 When the American people forked over $20 billion to New York to rebuild, they answered the human carnage wrought by radical Muslim terrorists with compassion for the living and respect for the fallen. They could not have foreseen a “community center” being built with their money, just past the smoke, to explain the virtues of Islam.

Yesterday we learned the Lower Manhattan Development Corporation will grant $17 million for “community and cultural enhancement.” The Park51 developers have asked for $5 million of that September 11 federal funding; they do not know the meaning of the word “insensitivity.”

While news of the application has not previously been made public, developer Sharif El-Gamal outlined it in closed-door meetings, according to two individuals he spoke with directly. The thirtysomething, Brooklyn-born El-Gamal is motivated more by real estate ambition — one of these sources describes him as aspiring to be the next Donald Trump — than Islamic theology or ideology.
…
Part of the strangeness of the application is that it blows past the suggested range of $100,000 to $1 million that these grants are supposed to fall to within (I’m told the entire pool for this round of cultural funding will come in under $20 million). According to the two sources knowledgeable about the thinking behind the proposal, the strategy behind the $5 million ballpark was trying to yield a higher figure in the end.

But the project likely doesn’t qualify for a grant in the first place. Specifically, the grant criteria mandate a demonstration of a project’s financial feasibility, based on benchmarks set by the U.S. Department of Housing and Urban Development (HUD). The government will help complete development projects — but it does not provide seed capital. And in their last public financial statement, Park51 was found to have less than $20,000 in the bank for a project with a slated cost of $100 million.

Imam Rauf touts the center as a place for “interfaith dialogue” yet advocates for discriminatory sharia law to be imposed here. Dozens of other organizations have waited years to apply in the hope of completing viable and appropriate projects; the LMDC has a prior responsibility to them.

“Why would we give them money ahead of so many other worthy groups?” fumed Tim Brown, a retired firefighter and first responder on 9/11 and a leading opponent of plans for a mosque two blocks north of the World Trade Center. “It’s so upside down,” Brown said of the project, which is a joint venture of real-estate developer Sharif El-Gamal and Imam Feisal Abdul Rauf. “They are the ones who insist the project is not at Ground Zero and then the next thing you know is they want to leverage 9/11,” Brown said.

Debra Burlingame, whose brother was a pilot on one of the hijacked airliners, cautioned against the use of any 9/11 funds for the mosque. “This is federal money, it was not intended to fund a propaganda issue,” said Burlingame. “If the LMDC gave them a penny, it would enrage everyone in lower Manhattan.”

Such grants require organizations to show “experience with comparable projects,” to demonstrate feasibility, and to have shown responsibility.

The Park51 developers owe $224,000 in unpaid property taxes on the existing building. A New Jersey judge recently ordered the low-income apartments Imam Feisal Abdul Rauf owns into temporary receivership due to infestations of bedbugs, roaches, and rats, despite Rauf having received $2 million in grants to fix up and maintain his buildings. In 1998, Rauf and his wife Daisy Khan were granted tax-free status to conduct religious service for “400 to 500” people at an address which turned out to be an 800-square foot apartment in Manhattan. The 37-year old property developer Sharif El-Gamal has been arrested seven times, including for assault in 2005. The main financial backer of Park51 donated thousands to an Hamas front group as he thought it “was going to an orphanage.”

In June, the Community Board 1 voted 29-to-11 to give Park51 their blessing. While CBI Chairwoman Julie Menin has a responsibility to the local community, she also serves the interests of the Nation as a LMDC board member which, in 2002, issued this statement:

“In the aftermath of September 11, the entire nation has embraced New York, and we have responded by vowing to rebuild our City – not as it was, but better than it was before. Although we can never replace what was lost, we must remember those who perished, rebuild what was destroyed, and renew Lower Manhattan as a symbol of our nation’s resilience. This is the mission of the Lower Manhattan Development Corporation.”