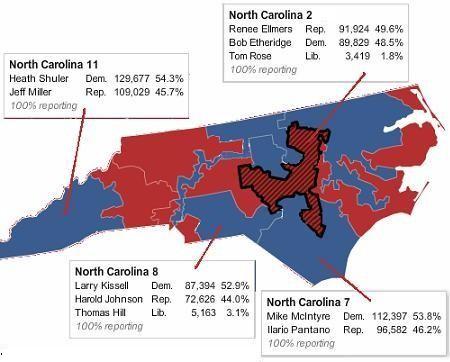 Congressman Bob Etheridge’s grabbing a “reporter” by the arm and striking him in the head this past June likely contributed to his apparent defeat in the midterm election. (Etheridge has stated he will ask for a recount if the vote is within one percent after the absentee ballots are counted and the race is certified.)

Yet also look at the 111th Congress voting records for the four “at-risk” Democrats running for reelection in North Carolina:

In addition, Congressman Etheridge consistently voted for closing Guantanamo Bay and for bringing Gitmo detainees to the U.S. for a civilian trial. Coupled with his weak response to Renee Ellmers’ ‘No Mosque at Ground Zero‘ campaign advertisement, they served to highlight Etheridge’s alignment with the politics of President Obama:

Bob Etheridge has never thought building this mosque and community center so close to Ground Zero is a good idea, spokesman Mike Davis said in a statement Tuesday. Davis labeled the ad a political tactic designed to distract voters. [Davis later added that Etheridge had not previously commented because it was “a New York” issue.] …
Etheridge has the clear financial edge in the race, sitting on more than $1.2 million as of his latest campaign filing. Ellmers has raised $355,000 to date, which her campaign notes is more than any of Etheridge’s previous GOP challengers have raised.

Renee Ellmers ran against Congressman Etheridge’s liberal voting record. He stood out as compared to the more conservative Democrats in North Carolina and that likely also contributed to why he lost the NC-2 election.

We concur with North Carolina’s Renee Ellmers that “The terrorists haven’t won. We should tell them in plain English, ‘No; there will never be a mosque at Ground Zero.'” Ellmers spoke with Freedom Radio about the mosque and her campaign to unseat Congressman Bob Etheridge:

Last year, eight Muslim residents of her Congressional district were arrested for plotting to attack the Marine Corps Base in Quantico, Virginia which demonstrated the threat posed by the rise of radical Islamists here is a national security concern.

Her opponent for North Carolina’s 2nd District seat, Congressman Bob Etheridge, reportedly “has never thought building this mosque and community center so close to Ground Zero is a good idea.” Yet his campaign spokesman Mike Davis “acknowledged that Etheridge has never offered his opinion publicly, but said that’s because ‘he’s not going to get involved in it. … That decision is for New York.'”

We join Renee Ellmers in her call for the leadership of the Republican and Democrat caucuses in Congress to support a resolution opposing the Ground Zero Mosque.

Ceding ground to those who promote the establishment of discriminatory sharia law here in America would encourage both the violent and “non-violent” jihad being waged against our Nation.

America was attacked on 9/11; the Stars and Stripes is the only victory flag that should ever fly over our sacred ground.