After speaking with ‘The Grand Jihad’ author Andrew C. McCarthy last night, Freedom Radio answered the preeminent post-9/11 question: where are the moderate Muslims? The mainstream media parades one myth after another on TV, talk radio, online, and in the newspapers. America is not fooled. The reason why we keep asking that question is there are no moderate Muslims.

Are we doomed? No. Yet we better first rip the microphone away from the vast, deeply entrenched, and blood-thirsty Muslim Brotherhood’s greater jihad operation — aka CAIR, MAS, ISNA, NAIT, MSA, IIIT, and FCNA — that currently controls the voice of Islam in America.

Here is my 10-minute take, last night on Freedom Radio with Pat. It starts with the last 30 seconds of ‘We Con the World’ and ends with 30 seconds of a ‘moderate’ con man revealing the U.S. Brotherhood’s true intentions, on December 22, 2000, in Washington, D.C. In between those clips, I submit that there is a non-violent way to defeat this growing internal threat to liberty.

You can see some evidence of what I assert here at 911FamiliesForAmerica.org and, better than I could ever present it, read ‘The Grand Jihad: How Islam and the Left Sabotage America.’ 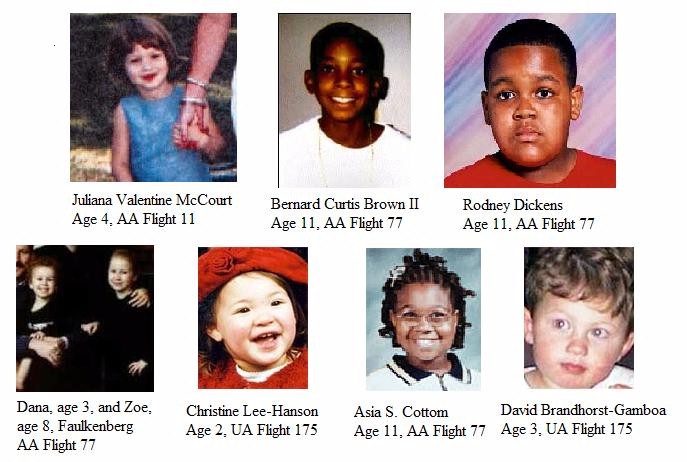 Eric Holder alleges that American lawyers are “patriots” if they defend terrorists, to include those who murdered the eight children pictured above — the eight kids that al Qaeda murdered on 9/11. He asserts those lawyers should not have “their reputations dragged through the mud.”

So now we know why the self-proclaimed “most transparent administration in American history” continues to stonewall rather than reveal the official responsibilities of Justice Department lawyers who volunteered their services to America’s enemies during wartime. Like any good Democrat, Eric Holder says he is doing it for the children.

The attorney general bristled during Senate testimony on Wednesday that he was “not going to allow these kids” to have their reputations dragged “through the mud.” The “kids” coddled in this touching paternal display include 45-year-old Tony West, who now supervises hundreds of lawyers as chief of DOJ’s Civil Division. It’s been 17 years since Tony the Kid first served as an influential official in the Clinton Justice Department. From there, he went on to nine-year stint as a hot-shot partner at a prestigious San Francisco law firm — in his spare time running both Barack Obama’s lavish presidential campaign in California and the defense of John Walker Lindh, the “American Taliban” convicted on terrorism charges after making war on his country.

They grow up so quickly, don’t they? Kids like 40-year-old Neal Katyal, the current deputy solicitor general who, as Byron York observes, was a Georgetown law professor when he volunteered to represent Salim Hamdan, Osama bin Laden’s personal driver and bodyguard, who was apprehended transporting missiles in Afghanistan.

Yet McCarthy also pointed out the failure to press Holder:

Republicans sat mum as their Democratic counterparts lauded the Gitmo Bar for its “courage” and falsely accused critics of claiming that lawyers who flocked to al-Qaeda’s service are “disqualified” from future government service. Mightn’t one GOP senator have pointed out that critics are simply demanding the transparency and accountability that President Obama and his attorney general promised? They certainly seemed to have reservoirs of indignation when Al Gonzales was attorney general. … READ THE REST

Why is Holder hiding the “kids” at the Justice Department? Could it be that they themselves damaged their own reputations by the manner they so “bravely” and willingly defended America’s enemies?

On November 2, 2005, Dana Priest of the Washington Post reported that the “CIA has been hiding and interrogating some of its most important al Qaeda captives at a Soviet-era compound in Eastern Europe.” The Post, citing the government’s security concerns, did not name the countries where the facilities were located. But just a few days later, on November 6, 2005, Human Rights Watch revealed the countries in a posting on its website. The organization said it had “collected information that CIA airplanes traveling from Afghanistan in 2003 and 2004 made direct flights to remote airfields in Poland and Romania.” The organization encouraged European officials to investigate further, and the Europeans did just that.

The delegation met with John SIFTON (Counterterrorism Researcher) and Jennifer DASKAL (US Advocacy Director) who provided the delegation with circumstantial evidence linking Poland and Romania to secret CIA prisons, including flight records, statements by Polish and Romanian government officials, as well as precise details of specific planes used by the CIA. Both recognized that they do not have formal evidence of these allegations, but stressed the indications of these facts were actually very strong. Their information was that there had been detainees in CIA custody well before the Guantánamo Bay detention center had been established.

Although the Europeans listed Daskal’s colleague, John Sifton, as a “counterterrorism researcher,” he was really researching the CIA—not the terrorists. In The Guantánamo Lawyers, a collection of short, sentimental memoirs written by dozens of lawyers, who sanitized their clients’ histories and glorified their work on behalf of war on terror detainees, Sifton offered an intriguing account of how Human Rights Watch assisted in uncovering details of the CIA’s operations.

“Throughout the years after 2001, journalists, human rights investigators, and lawyers managed to obtain a surprising amount of information about U.S. detention and interrogation operations,” Sifton wrote. He elaborated (emphasis added):

Amnesty International, Human Rights Watch, and the [New York] Times found and interviewed former CIA detainees. FOIA litigation by the Associated Press, the ACLU, and the Center for Constitutional Rights produced information about former CIA detainees at Guantánamo—lower-level prisoners who had been kept short-term in CIA detention. Every piece of the story seemed to come from a different source. .?.?.

Lawyers and human rights groups worked together, sharing “intelligence” to uncover what intelligence agencies were doing with detainees. When I was working at Human Rights Watch, I managed to piece together a good deal of information about the CIA’s detention facilities in Afghanistan by collecting accounts from former CIA detainees at Guantánamo, mostly from notes provided by habeas attorneys. I called and met with numerous Guantánamo attorneys to inquire whether their clients had been in CIA custody. In several instances, attorneys I reached were not aware that their clients had been in CIA custody until I explained that their clients’ own accounts matched those of other CIA detainees. In one notable example, I spoke with one of the editors of this book, Mark Denbeaux, after I came to suspect his client had been in a secret site in Afghanistan—the detainee had described one of his earlier places of detention in ways that closely matched other detainees’ descriptions of a CIA site in Afghanistan. The next time Mark went to Guantánamo, he confirmed this previously secret fact with the detainee.

Human Rights Watch published Sifton’s investigation of the CIA’s detention facilities in Afghanistan in a February 2007 report entitled “Ghost Prisoner.” The report draws on graphic descriptions offered by former detainees. That same report was “reviewed and edited” by Jennifer Daskal.

The America people have a right to know whether “heroes” and “patriots,” like Jennifer Daskal, are involved in formulating the detention policy of the United States and decisions on where and whether to prosecute war criminals. Eric Holder ought to disclose the information about the “kids” for the real children, the ones al Qaeda has already murdered, as well as those they are still trying to kill.