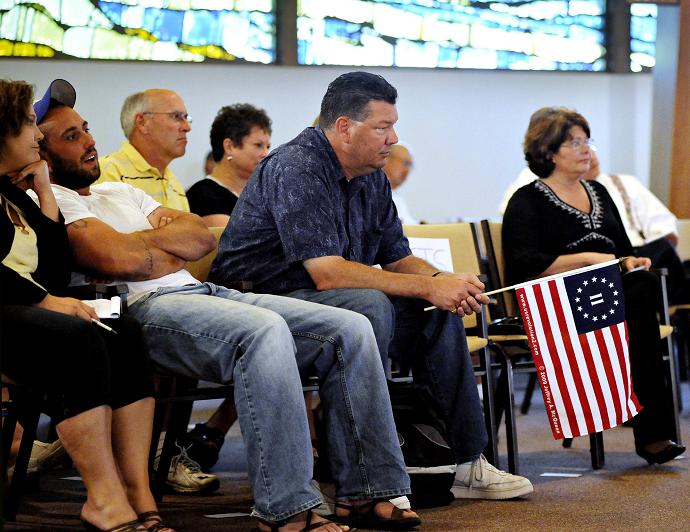 Many of the 300 people who attended today’s meeting in Standish, Michigan were already against moving Gitmo’s detainees there; the rest left with more questions than they came with, according to town hall organizer and long-time Standish resident Dave Munson. I spoke with Mr. Munson this afternoon, after the meeting. He said, “The Department of Defense needs to come up here and be honest with us about how this would effect our community.” He added that, “Eighty-percent of the current prison guards [at Standish] are ineligible to apply to become federal prison guards due to age. Moving detainees here would save few of the jobs currently filled by locals and force them to relocate to find work. We want to keep people here, not merely replace them with someone else living in their homes.” Yet Mr. Munson’s greatest fear matches that of most in attendance in Standish today: the potential terrorist threat to the community.

U.S. Rep. Pete Hoekstra, R-Holland and a candidate of Michigan governor in 2010, took the podium first and urged the people to push for transparency. Hoekstra has been one of the most vocal opponents of bringing Guantanamo detainees into the United States. “These are people who are committed to destroying our way of life,” Hoekstra said. “There is a reason we picked Guantanamo – you can’t get there.”

Also speaking against the transfer of detainees was Debra Burlingame, founder of 9/11 Families for a Safe and Strong America and sister of Charles Burlingame III, pilot of the plane hijacked by Muslim extremists and crashed into the Pentagon on Sept. 11, 2001.

Burlingame spoke softly, but her message resonated with the crowd. She said bringing the Guantanamo detainees to Standish – or anywhere else in the United States – is a “colossally bad idea.” She cited Standish’s proximity to Midland, home of the Dow Chemical Co., as one of her main concerns. Burlingame said Standish would become a target, and the crowd fell silent as she told of Muslim extremists committing attacks against Americans, at home and abroad.

“These detainees are not like ordinary criminals,” she said. “Detainees live for martyrdom operations.” Burlingame also said she, along with other family members of Sept. 11 victims, met with President Barack Obama in February and asked the president why he wouldn’t try to rehabilitate Guantanamo’s image instead of closing it.

The answer she demonstrated for the crowd – a shrug – prompted gasps from the audience. “You are owed a better answer than that,” Burlingame said as the crowd gave her a standing ovation.

“What you do here, make no mistake, they are watching in Washington,” Burlingame said. “And if we can kill it here, maybe we can kill it everywhere and keep Guantanamo open.”

Congressman Hoekstra’s office put out a statement this afternoon:

WASHINGTON, D.C. – U.S. Rep. Pete Hoekstra, R-Mich., the top Republican on the House Intelligence Committee, today spoke at a town hall meeting in Standish, Mich., where he made the point that the future of Michigan lies in creating jobs in tourism, advanced research and new technology, not “Gitmo Jobs.”

“As a former business marketing executive for a Fortune 500 company, experience tells me that making Michigan home to the world’s most dangerous terrorists will not make it more attractive for tourists, families or potential job providers,” said Hoekstra. “We need state leaders to pursue jobs for the future, the kind of jobs that attract new families and new business investment — in advanced technologies and automotive research, in medicine and science, and in agriculture and tourism, which will surely suffer as the state’s reputation is transformed from that of ‘Pure Michigan’ into the terrorist prison peninsula.”

Hoekstra has led the effort in Michigan and in Washington, D.C. against the Obama administration’s proposed plan to transfer terrorist detainees from Guantanamo Bay to a state prison, citing safety concerns for Michigan families. He also questioned the administration’s failure to demonstrate why Michigan would make a better alternative to the detention facility at Guantanamo Bay that was designed and built specifically to house al-Qaeda and other terrorist detainees at significant taxpayer expense.

“The administration is reportedly making pie-in-the-sky promises to local officials, but there is no guarantee that the federal and military jobs at Guantanamo Bay will go to local prison guards,” Hoekstra said. “The administration’s lack of transparency and willingness to provide actual data on Gitmo and its detainees also raises significant doubts about the hard sell they are putting on local officials. I have led the effort in Congress for openness and transparency on this issue for all Americans, and until the president actually shows it, the people of Michigan would be wise to be wary of feds bearing so-called gifts.”

Nearly every speaker during the two-hour gathering denounced the idea, many arguing that the 229 detainees should remain where they are, despite Obama’s pledge to close the Guantanamo complex by 2010. “They are enemy combatants,” said Tom Kerrins, chief steward for the union representing prison workers at Standish Maximum Correctional Facility. “They want to kill you, they want to kill me, they want to kill our families.”

Despite the one-sided tenor of the meeting, some officials in the town of 1,500 said in interviews that a “silent majority” of local residents would accept the detainees in order to save the prison, which is scheduled to close this year because of state budget cuts. The prison provides about 300 jobs, making it the top employer in the rural community about 145 miles north of Detroit where the jobless rate exceeds 17 percent. It covers about 25 percent of the municipal budget with payments for water and sewer service. “I’m hearing mixed feelings, but most of the people I’m talking to are for it,” said Lester Cousineau Jr., a city councilman. “If that prison closes, we’re done.”

Kerrins, though, said that federal guards — not the existing state crew — likely would staff the prison if Guantanamo detainees came.