Sen. Jim Inhofe’s office responded to our inquiry by email after the vote:

Senate Democrats today blocked the effort of U.S. Sen. Jim Inhofe (R-Okla.) to consider his amendment that would permanently keep the military-run detention facility at Guantanamo Bay, Cuba (GITMO) open while preventing terrorist detainees from being transferred to the United States.

“President Obama and the Democrats’ obsession with closing GITMO is confounding,” Inhofe said. “I attempted to get the Senate to consider my very clear and straightforward amendment to the Defense Authorization bill that would have ensured that GITMO remained open and denied the transfer of terrorist detainees to the United States. Polls have shown that most Americans do not want to close GITMO, and certainly do not want these terrorist detainees to be transferred to the United States. A few days ago, my office announced a petition drive to get Oklahomans and Americans to support my effort to keep GITMO open. In that short amount of time, my office was inundated with tens of thousands of signatures to the petition. The fact that the Democrats have blocked my amendment defies the outspoken desire of these Americans.”

Inhofe continued, “The amendment I tried to offer is very similar to S.370, a stand-alone bill I offered to keep GITMO open. I will continue to pursue every available opportunity to achieve legislation that permanently keeps the facility open and closes the door to terrorist transfers.”

To learn more about the Inhofe petition to keep GITMO open, visit here. 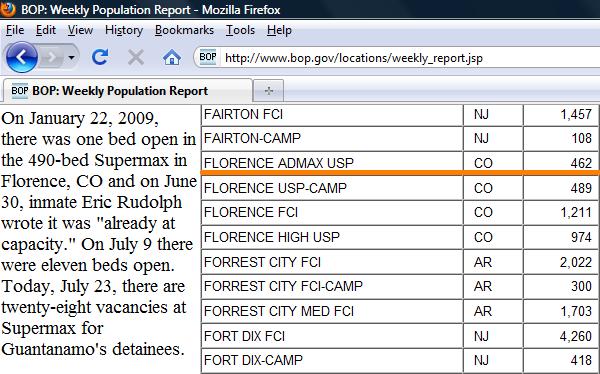 You would be hard pressed to find a Senator in Congress who will say, “Send terrorists to my state.” Yet Senate Democrats lack the courage to face their constituents after having voted to allow President Obama to bring al Qaeda’ killers into America’s prisons where they will continue the jailhouse jihad. Instead, they will let it happen by default.

This can still be stopped.