Our good friends at Cox & Forkum Editorial Cartoons point out that civilians also died at Pearl Harbor and quote Park Ranger Jack G. Henkels explaining why the memorial in Hawaii was updated to include the ages of the victims.

And they use choice words to accurately describe Mayor Bloomberg’s proposal for the 9/11 memorial at the World Trade Center (click on the image): 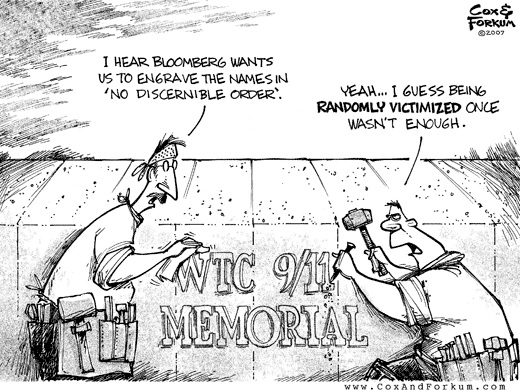 Yet, as I pointed out to them after seeing their cartoon, Mayor Bloomberg’s concept for a memorial leaves out more than the ages, locations, and the ranks of the military and first responders who died: 9/11.

That’s right. Mayor Bloomberg has decided that neither ‘9/11’ nor ‘September 11’ will appear on the memorial at Ground Zero.

Anything else missing? A flag.

Michael Bloomberg is obviously vying for the World’s Mayor title.

At the place where 9/11 began and ended, he has eliminated the American flag from the memorial plan.

How very PC of him

While we fully honor and respect the several hundred citizens from 90 other countries who were murdered on 9/11, Ground Zero was where Islamofascists first attacked America on its own soil.

September 11 is burnished into our collective memory and will long effect our nation’s course. America ought to mark the day and we ought to fly our flag. And we should do both at Ground Zero.