Today U.S. Congressman Sam Johnson (3rd Dist.-Texas) delivered the following closing statement on the floor of the House during the 36-hour debate on Iraq.

“We would spend hours tapping on the adjoining cement walls about what we would do when we got home to America.

“We pledged to quit griping about the way the government was running the war in Vietnam and do something about it… We decided that we would run for office and try to make America a better place for all.

“So – little did I know back in my rat-infested 3 x 8 dark and filthy cell that 34 years after my departure from Hell on Earth… I would spend the anniversary of my release pleading for a House panel to back my measure to support and fully fund the troops in harm’s way….and that just days later I would be on the floor of the U.S. House of Representatives surrounded by distinguished veterans urging Congress to support our troops to the hilt.

“We POWs were still in Vietnam when Washington cut the funding for Vietnam. I know what it does to morale and mission success. Words can not fully describe the horrendous damage of the anti-American efforts against the war back home to the guys on the ground.

“Our captors would blare nasty recordings over the loud speaker of Americans protesting back home…tales of Americans spitting on Vietnam veterans when they came home… and worse.

“We must never, ever let that happen again…”

Following his speech, 246 of his fellow Americans — every one of them who would lie to your face and say that they support the troops — voted to disapprove of Presdient Bush’s plan to support our troops by reinforcing them and their efforts in Iraq. 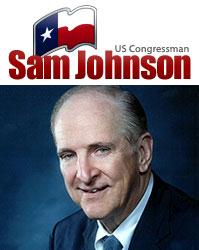 Please run, Congressman Johnson, for President in 2008 and I will support you.

The vote was a huge morale booster for al Qaeda, for Iraq’s Sunni insurgents, and for the worst of the Shia militias.

The message Congress just sent to them all was, “Hold on, we’ll stop the surge, we’re going to leave – and you can slaughter the innocent with our blessing.”

We’ve reached a low point in the history of our government when a substantial number of legislators would welcome an American defeat in Iraq for domestic political advantage.

Yes, some members voted their conscience. But does anyone believe they were in the majority?

This troop surge might not work. We can’t know yet. But we can be damned sure that the shameful action taken on the Hill while our troops are fighting isn’t going to help.

And a word about those troops: It’s going to come as a shock to the massive egos in Congress, but this resolution won’t hurt morale – for the simple reason that our men and women in uniform have such low expectations of our politicians that they’ll shrug this off as business as usual.

This resolution has teeth, though: It’s going to bite our combat commanders. By undermining their credibility and shaking the trust of their Iraqi counterparts, it makes it far tougher to build the alliances that might give Iraq a chance.

If you were an Iraqi, would you be willing to trust Americans and risk your life after the United States Congress voted to abandon you?

Now that Donald Rumsfeld’s gone, the Democrats are doing just what they pilloried the former Secretary of Defense for doing: Denying battlefield commanders the troops and resources they need.

Congresswoman Pelosi, have you no shame?

No, Colonel Peters, she and all 246 Members of Congress who voted as she did have no shame. And anyone one of them who says, “I support the troops,” is a liar for they do not even know what those words mean.