Mahdi Bray has been a leading member of the Muslim American Society (MAS) for a decade and clearly supports Hamas and Hezbollah.

As you read the rest of this post, please keep in mind three yet to be answered questions: 1) where did the cash come from for Soho Properties to purchase the Burlington Coat Factory at 43-45 Park Place just two blocks north of the World Trade Center, 2) where will $150 million come from to tear the building down and for Imam Feisel Abdul Rauf to build a mosque, cultural center, and “much needed party space” to be called the Cordoba House, and 3) who is funding the purchase of two other controversial mosques in New York City?

[On May 17, 2010], representatives of 9/11 [Families for a Safe & Strong America] met with Sharif El-Gamal, owner and CEO of Soho Properties, the corporation that purchased the two buildings where the mosque will be built at 43-45 Park Place, and asked him to name the investors in the mosque project. Mr. El-Gamal refused, citing the advice of his attorneys, stating that “this is private property” and that “we can build this ‘as of right.’” The property was purchased with $4.85 million in cash.

Today, the New York Times identifies Ayman Hammous, Abdel Hafid Djamil and Mohamed Sadeia as members “of the Muslim American Society” and reports that a meeting they attended last night in support of two planned mosques got very heated. Within their report, the Times quotes Mahdi Bray this way, “We are newcomers, and newcomers in America have always had to prove their loyalty,” said Mahdi Bray, the society’s executive director. “It’s an old story. You have to have thick skin.” Yet Mahdi Bray was born in America:

“…in 1950 and was more than 30 years old when he amassed at least three felony convictions during the 1980s. And, if his recollection of the timing of his conversion to Islam is accurate, it did not straighten him out. He had changed his faith years before becoming a felon. … He was convicted on the cocaine and larceny charges and sentenced to three years in prison, only to find himself in even bigger trouble toward the end of the decade. Throughout these ordeals, and even while incarcerated, Bray secretly was keeping hundreds of dollars a month in workers’ compensation money intended for his grandfather. … Wrighty Bray, Jr. died on December 1st, 1975 … The payments continued while Mahdi Bray was in prison for the drug and larceny charges. They continued after the Labor Department sent forms to Wrighty Bray, Jr. to update his status. He was indicted in June 1988 on 64 counts of mail fraud and receipt of stolen U.S. Securities. … In all, Bray kept more than $71,000 that the U.S. Government intended go to his grandfather. He pled guilty to one count of mail fraud on June 26, 1989 and was sentenced to 36 months in prison and ordered to make full restitution.”

At best, the Times provides sketchy backgrounds on those it quotes when reporting on hot-button issues such as the plans to build the largest mosque in the country at Ground Zero in lower Manhattan, to convert a Roman Catholic convent into a mosque in the Midland Beach neighborhood of Staten Island, and to build a mosque on an empty lot in the Sheepshead Bay area of Brooklyn.

Nor does the Times report on how the Muslim Brotherhood moved to America and transformed itself into the Muslim American Society and a number of other groups known collectively as the U.S. Brotherhood, and, through them, became the leading advocate for replacing our Constitution with political Islam, i.e. sharia law. For that, you must look to the detailed, credible research somewhere else. Let’s start here:

That’s a synopsis from a 71-page April 2009 report by Steven Merley for the Hudson Institute. Before I link to where you can read the whole thing on how the Muslim Brotherhood metastasized, here are excerpts from him on the Muslim American Society (MAS):

The Chicago Tribune reported that Mohammed Mahdi Akef, now the Egyptian Brotherhood Supreme Guide, says he helped found MAS by lobbying for the change during trips to the U.S. [Merley’s note #171: Akef lived in Germany from 1984-1987, where he headed the Munich center of the Muslim Brotherhood in Germany. See: Ian Johnson, “The Beachhead: How a Mosque for Ex-Nazis Became Center of Radical Islam.”] The MAS was registered as an Illinois corporation on June 11, 1993, and the founding documents list the following individuals as the initial board of directors: al-Soubani (Lansing, Michigan), Badawi (Halifax, Nova Scotia) [emphasis added mine], and Elkadi (Panama City, Florida). Gaddour Saidi of Garden Grove, California; and Mohammed Elharezi of Justice, Illinois, were listed as additional incorporators. As noted above, all of these individuals were known to be part of the U.S. Brotherhood leadership. A group of relatively unknown individuals were listed as MAS officers including Esam Omeish as President.

The MAS explains its creation in language consistent with the 1992 Elkadi letter:

Since its inception [Islamic Society of North America], and other organizations affiliated with it, worked diligently with those who were to become the founding members and future leadership of MAS, towards the advancement of the cause of Islam and Muslims in North America. Mindful of the dynamic changes that are taking place within the Muslim community and its surroundings, and keeping an eye on the future, a number of Islamic workers and Islamic movement followers decided in 1992, after a painstaing measured and tedious process of soul-searching and consultation, to launch the Muslim American Society in order to complement the work accomplished over the last three decades, and to lay the ground for the Islamic effort needed to face the next century’s challenges. [Merley’s note #172: About MAS,” Muslim American Society, http://www.masnet.org/aboutmas.asp“]

In case you did not link through to the Muslim American Society’s ‘about’ page, here are the key passages:

This movement brought the call of Islam to Muslims throughout the globe to reestablish Islam as a total way of life. The call and the spirit of the movement reached the shores of North America with arrival of Muslim students and immigrants in the late 1950s and early 1960s.

These early pioneers and Islamic movement followers established in 1963 the Muslim Student Association (MSA) of the U.S and Canada as a rallying point in their endeavor to serve Islam and Muslims in North America. Other services and outreach organizations soon followed, such as the North American Islamic Trust (NAIT), the Islamic Medical Association (IMA), the Muslim Arab Youth Association (MAYA) and the Muslim Youth of North America (MYNA), to name a few.

Twenty years later, Islamic movement followers and sympathizers in North America launched the Islamic Society of North America (ISNA) as an outgrowth of the Muslim Students Association (MSA) to serve the needs of the ever-growing number of indigenous and immigrant Muslims who had opted to reside permanently in North America.

Since its inception, ISNA, and other organizations affiliated with it, worked diligently with those who were to become the founding members and future leadership of MAS, towards the advancement of the cause of Islam and Muslims in North America.

Obviously missing from the MAS ‘about’ page is anything about furthering the cause of America. I digress.

Earlier, the Muslim Brotherhood planted the roots of the MAS, NAIT, ISNA, etc:

This “new organizational format” of the U.S. MB may have been related to the “The Cultural Society,” an organization that was created in 1962 to protect the identity of Muslim Brothers who had come to the U.S. The Chicago Tribune investigation detailed the formation of the Society:

A U.S. chapter of the Brotherhood … was formed in the early 1960s after hundreds of young Muslims came to the U.S. to study, particularly at large Mid western universities such as Illinois, Indiana, and Michigan. Some belonged to the Brotherhood in their homelands and wanted to spread its ideology here. But to protect themselves and their relatives back home from possible persecution, they publicly called themselves “The Cultural Society” and not “The Brotherhood.” [Merley’s note #20]

There is no available information about where the Cultural Society was first established or the identity of its early leaders. [Merley’s note #21] However, the Tribune investigation reported that the Cultural Society went on to help establish the Muslim Students Association (MSA) in 1963, the first in a series of the Brotherhood’s public or “front” organizations. A U.S. Brotherhood document confirms that MSA was founded by the Brotherhood giving a slightly earlier date:

In 1962, the Muslim Students Union was founded by a group of the first Ikhwans in North America and the meetings of the Ikhwan became conferences and Student Union camps. [Merley’s note #22: Muslim Brotherhood Shura Council, “Shura Council Report on the future of the Group,” Government Exhibit 003-0003 3:04-CR-240-G U.S. v. Holy Land Foundation et. Al, http://www.nefafoundation.org/miscellaneous/HLF/MBUS_History.pdf p. 4.] [Also see the post-trial DOJ press release on the convictions of the five Holy Land Foundation members, “HLF became the chief fundraising arm for the Palestine Committee in the U.S. created by the Muslim Brotherhood to support Hamas.”]

Take a look at Merley’s chart and here is the link to where you can download and read his entire report: 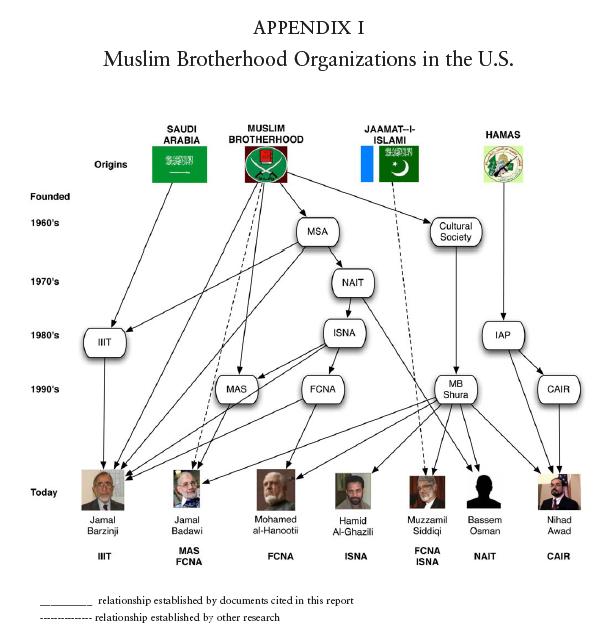 Again, those three unanswered questions for Iman Rauf and the el-Gamal brothers at the Cordoba Initiative, as well as for the Muslim American Society:

1) Where did the $4.85 million in cash come from for Soho Properties to purchase the Burlington Coat Factory at 43-45 Park Place just two blocks north of the World Trade Center, 2) where will $150 million come from to tear the building down and build a mosque, cultural center, and “much needed party space” to be called the Cordoba House, and 3) who is funding the purchase of the Roman Catholic convent on Staten Island and the building of the mosque in Sheepshead Bay in Brooklyn?

1 comment for “Is the Muslim Brotherhood behind the planned mosques at Ground Zero, Sheepshead Bay, and Staten Island?”