Incumbent U.S. Congressman Ben Lujan (D-NM, 3) was once considered ‘safe’ to win reelection to Congress. Yet Lujan voted for bringing Khalid Sheikh Mohammed here for federal trial, the health care bill, Cap and Trade, and the TARP bailout. In the only recent poll, a Democrat pollster now finds Lujan’s lead over main Republican rival Tom Mullins has narrowed to within the margin of error, 40 to 36.

Adam Kokesh running as a Republican in the primary against Mullins and his trailing Lujan only 40 to 32 are both far harder to explain.

Is Kokesh a grass roots fiscal conservative or an antiwar activist masquerading as a conservative-libertarian to deceive the people of New Mexico? Before voters there decide, perhaps they should review his multiple arrests — including for smuggling home a firearm — in addition to his anti-war protests while in uniform, anti-military recruitment actions, and travel to an allied nation to encourage U.S. soldiers stationed there to go AWOL.

According to the Washington Examiner, Kokesh was busted after his tour in Iraq;

He was supposed to go to Iraq a second time, but was demoted from sergeant to corporal and not allowed to return after it was learned that he brought a pistol back after his first tour in 2004. [Hat tip to This Ain’t Hell.]

On September 1, 2007, Kokesh called for help from Veterans For Peace with an upcoming antiwar “die-in” in Washington, D.C. Kokesh was arrested there on September 6, 2007 for defacing public property (here is the video). On September 15, while 10,000 of so A.N.S.W.E.R.-led students “died” on the Capitol’s west lawn, Kokesh was again arrested when he, Code Pink, and perhaps thirty more crossed the police line. 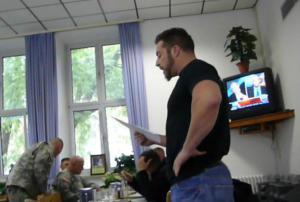 In mid-May 2007, Kokesh traveled to Germany where he and another Inactive Reservist brought an unauthorized civilian onto a U.S. military base. He then entered a crowded dining facility. Kokesh himself recounted the “IVAW German Expeditionary Team … base action” and his reading aloud a letter from “the people of Ansbach” to soldiers there, many of whom who would soon deploy to Iraq:

If any of you should decide to leave the Army while in Germany and throw down your arms, the people of Ansbach will support you and do our best to provide you with aid, comfort, and sanctuary. We wish to build a new relationship between the people of Germany and the people of America on the basis of peace, reconciliation, and understanding. [Unfortunately, someone at IVAW no longer wants New Mexico to see the video they once so proudly posted on YouTube. Kokesh’s Iraq Veterans Against the War post is reprinted here, his original post is here [Note June 2, 2011: The orginal narrative by Adam Kokesh has been changed to unrelated commentary] and I have the screen shots just in case they decide to hide it as well.] 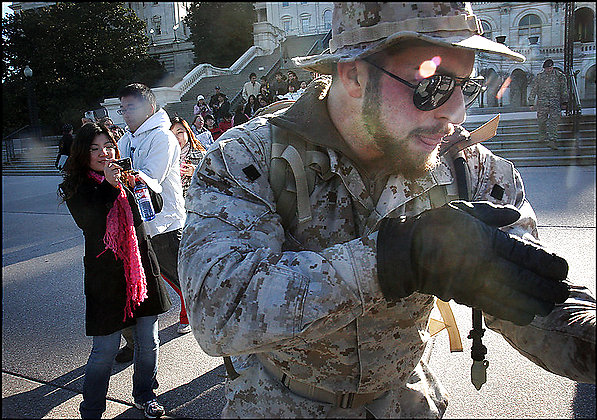 Two weeks later, Kokesh was back in D.C. acting nothing like a new-age founding father:

[T]he Marines have launched investigations of three inactive reservists for wearing their uniforms during antiwar protests and allegedly making statements characterized as “disrespectful” or “disloyal.” Two of them were part of the guerrilla theater squad of 13 Iraq Veterans Against the War who roamed Capitol Hill and downtown Washington in March, clad in camouflage and carrying imaginary weapons, to mark the fourth anniversary of the Iraq war. A Washington Post story about that protest is part of the evidence gathered by Marine lawyers. … Upon learning he was being investigated for wearing his uniform during the mock patrol, Kokesh wrote an e-mail to the investigating officer, Maj. John Whyte. The combat veteran discussed his service and his critique of the war, and asked this officer assigned to look into his “possible violation” of wearing his uniform: “We’re at war. Are you doing all you can?” He concluded with an obscene recommendation about what Whyte should go do. This earned him the count for a “disrespectful statement.” [Kokesh was discharged ‘under general conditions‘.]

Over the Columbus Day weekend 2007, Kokesh and six other students tacked up racist anti-Islamic posters around the campus of George Washington University with “Brought to you by Students for Conservativo-Fascism Awareness” across the bottom. GWU was “dismayed” at the “satire” to mock the sponsors of Conservative Awareness Week 2007.

I remember Kokesh when he brought a whole busload of members of World Can’t Wait, ANSWER, SDS, to disrupt the recruiting station at 14th & I Street in Washington, DC. They ran around in circles out in front of the recruiting station that day yelling silly slogans against our Soldiers and the War. Their antics caused about 7 members of the Metro Police to have to stand guard out in front of the station for hours. How’s that for how he disrupts the recruiters, the city and wastes our tax dollars. I remember Kokesh when he tried to stage a re-enactment of the Winter Soldier testimony of the traitor John Kerry days! We disrupted both of these events and the Winter Soldier nonsense was a debacle. Adam Kokesh is a phony who reinvents himself yearly.

Liberty candidates are under fire on all fronts. Even from groups that claim to be for liberty and the Constitution. On the main page of the 9/12 Project’s website, and again in its New Mexico forum are topics named “A Traitor in Sheep’s clothing trying to deceive the Voters” … This is a hit piece on Adam Kokesh and needs to be slapped down. The thread on the New Mexico is worse than the one on the front page, but they both need to be countered. Update: For those that want to see what the attack is before going to the site, here it is.

We are writing to you to express our grave concerns about Adam Kokesh, who is aspiring to become the Republican nominee for US Congress from New Mexico’s 3rd district. Mr. Kokesh has an extensive, and well-documented history of affiliations with radical leftist groups. In concert with these groups he has engaged in numerous anti-America and anti-military demonstrations and protests. Moreover, Mr. Kokesh does not appear to have any personal qualifications that would recommend him for serious consideration as a candidate for the Republican Party. He has a significant history suggestive of poor character and judgment, and he has notable incidents of direct activism against Republican office holders. [READ THE REST yet note The Daily Paul re-posted it from 9/12’s site forum. The original is here.]

Retired U.S. Army senior NCO and combat infantry veteran Jonn Lilyea writes, “I’m not sure that Kokesh doesn’t think he’s a Republican. The Paulians are convinced that they can change the party and I think that’s what his real goal is.” Makes perfect sense to me. Yet even if Kokesh loses the June 1 primary, he can register as an independent candidate, be on the ballot in November, and attempt to bleed support away from Tom Mullins so Ben Lujan returns to Congress.

I don’t know Mullins from Adam yet perhaps voters in New Mexico’s 3rd District will soon sort out the saints from the sinners in that race.

President Barack Obama on Iraq, last night during his State of the Union Address:

“As we take the fight to al Qaeda, we are responsibly leaving Iraq to its people. As a candidate, I promised that I would end this war, and that is what I am doing as President. We will have all of our combat troops out of Iraq by the end of this August. We will support the Iraqi government as they hold elections, and continue to partner with the Iraqi people to promote regional peace and prosperity. But make no mistake: this war is ending, and all of our troops are coming home.”

Was that a loss, win or tie? If someone won, which side, and who and what made victory possible?

America won, our coalition won, and the people of Iraq won. Together, we won by force of arms and staying the course, despite the mistakes made — as they are always made — in the fog of war, growing political opposition at home, and enemy opposition on the battlefield.

Yet they did not fight or pay the price alone. Their families, the troops of many nations, and thousands of federal and contracted personnel stood with them, fought along their sides, or supported them near and from afar. And the Iraqi people won because America stood with them through years of chaos, helped them to establish a government, worked with multiple factions despite civil war, and trained an army and police forces that could stand on their own, defend in place, and keep peace on Iraqi streets.

Obama has to date thanked exactly no one.

Last night, he thanked not one U.S. or coalition fallen hero, wounded troop, intelligence agent, government official, family member, ally, or Iraqi. Stunning is too small a word to describe that omission. “This war is ending.” No, Mr. Obama, we ended it with our victory; you are just now the guy in charge of a homecoming victory parade you will never conduct.

Obama did not lead the fight in Iraq, fight there or sacrifice himself, or acknowledge those who led, fought, and sacrificed. Our troops and that leadership were owed at least this President acknowledging another honorable chapter in American history written in blood.

Update: President Obama needs to be introduced to the American soldier by General Douglas MacArthur:

And what sort of soldiers are those you are to lead? Are they reliable? Are they brave? Are they capable of victory?

Their story is known to all of you. It is the story of the American man at arms. My estimate of him was formed on the battlefields many, many years ago, and has never changed. I regarded him then, as I regard him now, as one of the world’s noblest figures; not only as one of the finest military characters, but also as one of the most stainless.

His name and fame are the birthright of every American citizen. In his youth and strength, his love and loyalty, he gave all that mortality can give. He needs no eulogy from me, or from any other man. He has written his own history and written it in red on his enemy’s breast.