Bill Burck and Dana Perino write on the Corner at the National Review Online:

No one yet knows for sure who is responsible for the attempted terrorist attack in Times Square last night. It could be al-Qaeda or some other Islamist terrorist group, or some other group, or an individual acting on his or her own. Initial reports are that it may have been a crude bomb and a relatively amateur attack. Of course, homicide bombers are not known for their smarts, nor is the technology they use particularly sophisticated in most cases. But don’t be fooled by claims in the press that this was an amateur attack. Whoever tried to kill innocents in midtown Manhattan last night knew exactly what they were doing. They targeted Times Square in Manhattan not as a random act, but as a message that Americans remain vulnerable to indiscriminate murder for fanatical religious or political reasons, and that our most significant landmarks are not safe from attack. Whoever did this, we can be sure, is in league with the underwear bomber, Major Hasan, and other terrorists either in fact or in spirit.

I fully agree with their bottom line; you can read it here. A civilian trial in New York of the 9/11 conspirators needs removed from “the table” and, instead, conducted by military commission at the most secure detention facility in the world, the U.S. Navy facility at Guantanamo Bay.

While DHS Secretary was flying back from flying over an oil spill she could have seen via a live feed to her office, a terrorist was preparing to drive to Times Square with a bomb. AG Eric Holder sent attorneys, including American Taliban John Walker Lindh lawyer turned Assistant Attorney General Tony West, to Louisiana to ramp up civil suit action instead of working on a foreign policy that interrogates terrorists first and foremost for intelligence and figures out in what venue to prosecute them later. While SEAL teams would have been the wiser choice to defend offshore oils rigs, President Obama sent Interior Department SWAT teams that would better serve to defend the porous Mexico-U.S. border in Arizona. Is there anyone in this administration who puts common sense and the nation’s common defense ahead of politics?

Our nation makes selective use of enemy communications. We intercept to gather intelligence and jam to disrupt enemy command and control; these help shape the battlefield and forces the enemy to fight at a disadvantage. Limiting enemy propaganda is a critical aspect of winning the information battle fought during every war.

Some, including Michael Daly at the New York Daily News, used the subway bomb plotter’s fifteen minutes of fame in Brooklyn’s federal court to claim there would be no harm in prosecuting Khalid Sheikh Mohammed the same way, in the same place:

Why not put Khalid Shaikh Mohammed on trial in New York … He is only going to make himself sound as twisted as Ahmedzay. He is sure to sound exactly like a monster who would murder thousands of innocents. He certainly is not going to sway anybody who has any sense and decency.

President Franklin Roosevelt provided no public forum to enemy war criminals to spew pro-Nazi propaganda. On June 13, 1942, eight German saboteurs landed on Long Island and Florida shores and buried their uniforms on the beach. According to the U.S. Department of Justice:

The purpose of the invasions was to strike a major blow for Germany by bringing the violence of war to our home ground through destruction of America’s ability to manufacture vital equipment and supplies and transport them to the battlegrounds of Europe; to strike fear into the American civilian population, and diminish the resolve of the United States to overcome our enemies.

All eight were captured a week later and six of the eight — including American citizen Herbert Hans Haupt — were executed a mere fifty-six days after landing. Their military tribunals were witnessed by a few selected journalists; the courtroom was closed to them when classified information was discussed and their news reports were censored. Germany made no further attempt to attack America on its soil during WWII.

At Gitmo, judges and prosecutors have a ‘pause button’ close at hand to instantly silence the sound outside the glass enclosed section of the courtroom to prevent the accidental release of classified information. 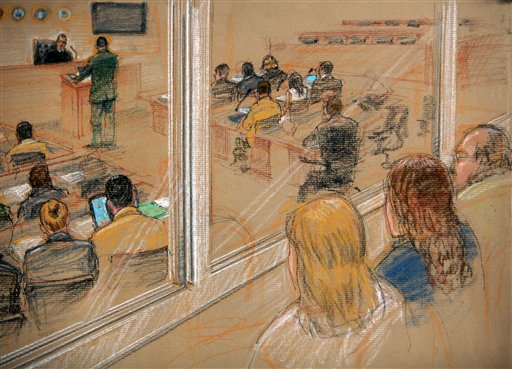 It should also be used to silence KSM’s propaganda whenever he attempts to incite more to fight our troops and attack the innocent. The defense lawyers and mainstream media (and al Jazeera) would denounce the practice. So what? (They would denounce his trial by military commission regardless.) FDR ignored their complaints and informed the Supreme Court he would do the same to them, no matter how they ruled.

Khalid Sheikh Mohammed is not some righteous dissident; he is a senior member of al Qaeda. America’s enemies have no Constitutional right to use our system to promote their causes.

Let’s jam the jihad as we prosecute the 9/11 conspirators.