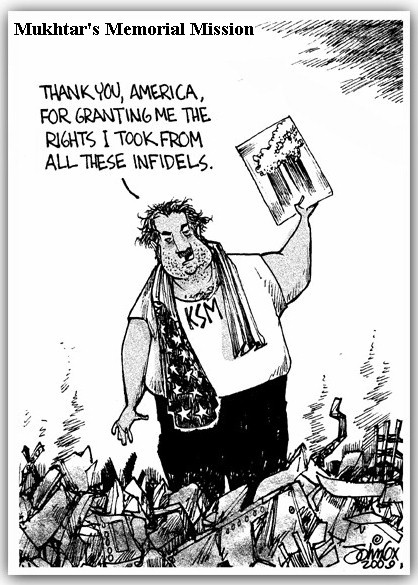 We received tonight from the Office of Military Commssions that the charges against Khalid Sheikh Mohammed and his four senior cohorts will be resworn Tuesday:

We wanted to inform you that charges will be sworn tomorrow against Khalid Sheikh Mohammed, Walid Bin ‘Attash, Ramzi Binalshibh, Ali Abdul Aziz Ali, and Mustafa al Hawsawi for their involvement in the September 11, 2001 attacks. The eight charges common to all five of the accused are: Conspiracy, Murder in Violation of the Law of War, Attacking Civilians, Attacking Civilian Objects, Intentionally Causing Serious Bodily Injury, Destruction of Property in Violation of the Law of War, Hijacking Aircraft, and Terrorism.

The Conspiracy charge details 167 overt acts allegedly committed in furtherance of the 9/11 attacks, and alleges the following against the five accused in the following order:

Khalid Sheikh Mohammed is alleged to have been the mastermind of the 9/11 attacks by proposing the operational concept to Usama bin Laden as early as 1996, obtaining approval and funding from Usama bin Laden for the attacks, overseeing the entire operation, and training the hijackers in all aspects of the operation in Afghanistan and Pakistan.

Walid Muhammad Salih Mubarak Bin ‘Attash is alleged to have administered an al Qaeda training camp in Logar, Afghanistan where two of the September 11th hijackers were trained. He is also alleged to have traveled to Malaysia in 1999 to observe airport security by U.S. air carriers in order to assist in formulating the hijacking plan. It is also alleged that he provided a letter to Usama bin Laden detailing his findings on airport security, including how to get a razor-knife on board an aircraft.

Ramzi Binalshibh is alleged to have originally been selected by Usama bin Laden to be one of the September 11th pilot-hijackers with his Hamburg, Germany associates Mohamed Atta, Ziad Jarrah, and Marwan al Shehhi. It is alleged that after filming a “martyr video” in preparation for the operation, but then failing four times to get a visa to travel to the United States to attend flight school, Binalshibh continued to assist the conspiracy by engaging in numerous financial transactions in support of the 9/11 operation. It is also alleged that Binalshibh then became the communication hub between the pilot-hijackers and senior al Qaeda leadership regarding the planning details of the operation.

Mustafa Ahmed Adam al Hawsawi is alleged to have assisted and prepared the hijackers with money, western clothing, traveler’s checks and credit cards. He is also alleged to have facilitated the transfer of thousands of dollars between the accounts of alleged 9/11 hijackers and himself around September 11th, 2001.

These charges are allegations and the five accused are presumed innocent unless and until proven guilty beyond a reasonable doubt by a military commission.

After charges have been sworn, they will be presented to the Legal Advisor for the Convening Authority (CA) for his review and advice. After this review, the CA – in his sole discretion – may then refer the charges to a military commission. The CA will also determine whether or not to refer the charges to a capital military commission (meaning whether or not the death penalty will be sought in the case). If referred (capital or non-capital), a military judge would then be assigned and a panel of eligible military officers would be selected as potential members of the military commission. The accused would then be arraigned within 30 days of the service of the referred charges.