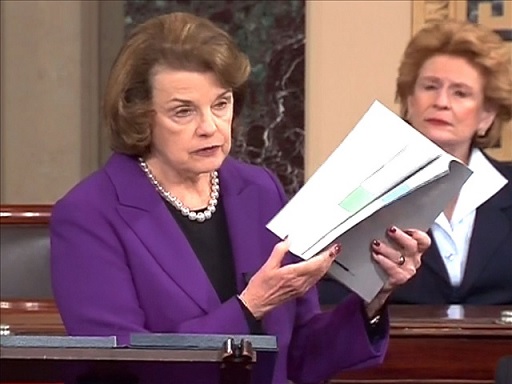 It was infuriating watching outgoing Chairwoman Dianne Feinstein on the Senate floor Tuesday vividly describe, “the sound of bodies striking canopies at ground level as innocents jumped to the ground below from the World Trade Center,” and within seconds state, “In 1990, the United States Senate ratified the Conventions Against Torture.”

There was no mention by Senator Feinstein that CIA Directors under Presidents Bill Clinton, George W. Bush, and Barack Obama are all on the record stating enhanced interrogations worked.

Successive DOJ investigations by the Bush and Obama administrations brought no charges related to the use of OLC-approved EITs. Does any rational person truly believe Attorney General Eric Holder would not have prosecuted CIA officers and contractors had he found evidence of torture?

We are still at war; Americans are getting their heads cut off by terrorists driven by the same ideology that drove 19 hijackers to slaughter 3,000 men, women, and children on 9/11.

This tweet from Abu Bakr #Caliph (undoubtedly a reference to IS leader Abu Bakr al Baghdadi) urges outraged Muslims to curb-stomp their offenders: “From now on when someone accuses your Muslim brother of terrrorism, stick the #torture_report on the heel of your shoe and shove it in his mouth.”

If you only read the opening letter in rebuttal to the Senate “study” by the current Director of Central Intelligence John Brennan, you will begin to know the CIA’s detention and interrogation program worked. And make no mistake about Mr. Brennan’s politics; he served as President Obama’s chief counterterrorism advisor from day one of this administration before being appointed as the DCI:

“Notwithstanding the above areas of agreement, there are several areas of disagreement as well. In particular, the Agency disagrees with the Study’s unqualified assertions that the overall detention and interrogation program did not produce unique intelligence that led terrorist plots to be disrupted, terrorists to be captured, or lives to be saved. The Study’s claims on this score are inconsistent with the factual record, and we provide detailed comments in TAB C on where and why the Study’s assertions and representations are wrong.”

In part, DCI Brennan added: “I have carefully reviewed and concur with the Agency’s comments…”

The CIA’s TAB C rebuttal ‘Information on the Courier that Led to the UBL Operation‘ and all 20 of it’s detailed debunkings are stark evidence that Senator Feinstein’s “study” is a $40 million dollar pack of deliberate distortions.

9/11 Families for a Safe and Strong America stands with those who did what was necessary to prevent further attacks. We know that the CIA saved lives.

We are saddened by the political partisanship that divides, and fear for our homeland and those that serve it abroad in harm’s way. More bitter days may lie ahead; America can and must rise together as a Nation once again.