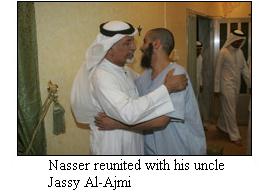 “Mr. Mutairi’s profile is the most brazen example of Mr. Levick’s confidence that the media can be easily manipulated. The Web site describes him as a member of an apolitical and peaceful sect of missionaries, and that he went to Afghanistan in October of 2000 to “minister in the small mosques and schools” in the country’s poorer regions.” — Debra Burlingame

On July 29, 2004, Mr. Mutairi’s status was reviewed by a Combatant Status Review Tribunal. Read the results and decide, in your court of public opinion, what he went to Afghanistan for:

While the Tribunal understands the detainee’s motives for going to Afghanistan and recognizes he arrived there well before 11 September 2001, it is clear he actively supported Taliban forces after 11 September 2001. By his own admission, he served in northern Afghanistan in lines with or near Taliban forces, and his positions were meant to support the Taliban forces in their fight against the Northern Alliance. Furthermore, when he withdrew from those lines, he withdrew to a Taliban controlled city, Korduz, because all the other cities had fallen to forces opposed to the Taliban. He remained armed until a deal was brokered with the Northern Alliance to allow him to leave Korduz–only then did he lay down his weapons. Finally, when choosing where to go, he noted both Bamiyan and Mazar e-Sharif were enemy locations, but Mazar e- Sharif was considered less dangerous. The detainee’s own testimony made it clear he had cast his lot with the Taliban, even after the September 11, 2001 attacks. Accordingly, the Tribunal concluded the detainee meets the definition of an enemy combatant.