Today, the Washington Post does not mention how Tariq Shallah Hasan Al Alawi Al Harbi, from Medina, Saudi Arabia, born sometime in 1983, managed to become Guatanamo detainee #265. Instead, their Foreign Service reporter, Faiza Saleh Ambah, only refers to him as Mishal al-Harbi and relies heavily upon his family’s assertion that he was abused while a detainee in Guantanamo. While he admits going to Afghanistan, “for jihad, for the sake of God,” the Post leaves out al-Harbi’s March 2005 Combatant Status Review Tribunal (pdf format pages 65 through 67):

Through the internet, the detainee read about a fatwa issued by Sheik Hamood al Okla. The fatwa stated every Muslim should go to Afghanistan (AF) to fight the Northern Alliance troops. The detainee decided to go to Afghanistan in order to obey the fatwa. Sheik Hamud al Uqqla is a Saudi Mufti who issued fatwas, including a fatwa calling for jihad in Afghanistan, and encouraged people to fight Jihad against Christians and Jews. Al Uqqla condoned the 11 Sep 01 attacks against the United States. In addition, he helped raise money for Usama Bin Laden until his death in Saudi Arabia in 2001. In June 2001, the detainee voluntarily traveled from Saudi Arabia to Afghanistan for the purpose of fighting the Northern Alliance.

Detainee name was on a list of names of captured Mujahidin found on a hard drive associated with a senior al Qaida member. The hard drive was seized on 1 March 2003 in Pakistan. Detainee’s name was found on a file recovered from a computer server hard drive seized in a suspected Al Qaida safehouse in Pakistan. His name was part of a list of Arabs incarcerated in Pakistan. The data was recorded sometime between 31 March 2001 and 22 January 2002. The detainee’s name was found on a document retrieved in Afghanistan in March 2002. The document listed the names of Al Qaida martyrs, those missing in action, those imprisoned, and those who had escaped to Pakistan. In Quetta, Pakistan, detainee met some Taliban on the street who led the detainee to a guesthouse in Qandahar, where he stayed for a week of questioning and was then sent to the “Faruk camp” for training.

The detainee was apprehended by Pakistani Police when he attempted to cross the Pakistani border. He was then transferred to U.S. custody.

In other words, Mishal al-Harbi, aka Tariq Shallah Hasan Al Alawi Al Harbi: went to join the Jihad, before 9/11, against Christians and Jews; received weapons training at al Qaeda’s Al Farouq camp where four of the 9/11 hijackers, the Buffalo Six, and the “Australian Taliban” David Hicks all trained; and was captured when the US invaded, the Taliban he was fighting for were routed, and he attempted to escape into Pakistan.

While there, he tried to hang himself and spent months in an American hospital. In July 2005, he was apparently assessed to no longer be a threat to the United States, was released to Saudi Arabia, and returned home to Medina nine months later. Al-Harbi retains his ‘unlawful combatant’ status.

Now his family wants compensation and the “truth” from the American government:

MEDINA, Saudi Arabia — Mishal al-Harbi’s brain was deprived of oxygen for several minutes on the evening of Jan. 16, 2003, while he was in U.S. detention at Guantanamo Bay, Cuba. As a result, he cannot stand, his speech is slurred, and he has a twitch that periodically causes his head to shake and his legs to jerk.

U.S. authorities say Mishal’s brain was damaged when he tried to hang himself at Guantanamo. But his brother Fahd says a beating by prison guards cut off the flow of oxygen, leaving Mishal unable to walk or talk properly. Fahd said his brother needs intensive physical therapy and costly medicine to control his seizures and hallucinations — side effects of the injury — and he wants the U.S. government to help pay for them.

Mishal’s family says it is seeking not only financial compensation but also concrete answers from the U.S. government — either an admission that Mishal was injured by guards or proof that he tried to kill himself. But given the intense secrecy surrounding the detainees at Guantanamo, finding out exactly what occurred that day in 2003 appears almost impossible.

“He was just like the rest of his brothers before he left,” said Mishal’s mother, Hamida Owayid, her head covered with a blue scarf and her feet decorated with henna. “What did the Americans do to him? ” (Washington Post story).

Mishal al-Harbi, aka Tariq Shallah Hasan Al Alawi Al Harbi, deserves no compensation for becoming a terrorist, getting captured, and then hanging himself. We will keep an eye on this story to see who becomes his American lawyer and PR firm and when they attempt to “rehab” al-Harbi in the eyes of the world and our legal system.

Update, 7:30 PM EDT: Mishal al-Harbi must have received some excellent treatment in that US military hospital as he looks pretty healthy to me. 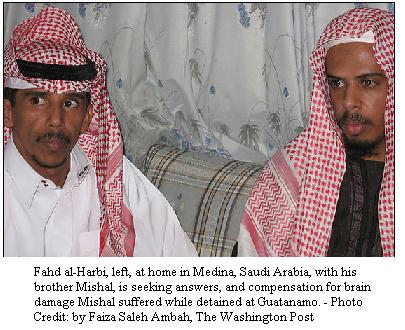 Our wounded are the ones who should get everything they need to recover.

America should not compensate our enemies. Instead, we should bill those Taliban, al Qaeda, and other terrorists for medical treatment when their injuries were self-inflicted for propaganda purposes.