KING: I’d like to just simply ask you, yes or no, by taking those steps, do you believe the president of the United States has made Americans less safe?

CHENEY: I do. I think those programs were absolutely essential to the success we enjoyed of being able to collect the intelligence that let us defeat all further attempts to launch attacks against the United States since 9/11. I think that’s a great success story. It was done legally. It was done in accordance with our constitutional practices and principles.

President Obama campaigned against it all across the country. And now he is making some choices that, in my mind, will, in fact, raise the risk to the American people of another attack. 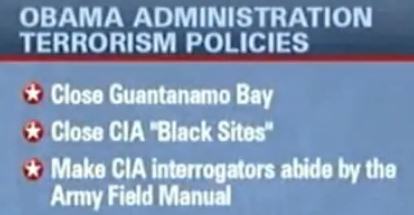 KING: That’s a pretty serious thing to say about the president of the United States…

KING: … and commander in chief of the military. So I want to give you a chance, because many people will say, Vice President Cheney just said Barack Obama, President Obama is making us less safe, more at risk, which you just said. I want to give you a chance — and take as much time as you want — to prove it. Because you put that list up there, and I know you say there have been three cases, I believe, of waterboarding in the past, and you say that specific things have been prevented. I know some of this is classified intelligence, but now that you’re out of government, to the degree that you can, tell the American people, because of those tactics, because of those, yes, sometimes extreme tactics, we stopped this.

KING: But another 9/11, because of a tactic like waterboarding or a black site, can you say with certainty you stopped another attempt to do something on that level?

CHENEY: John, I’ve seen a report that was written based upon the intelligence that we collected then that itemizes the specific attacks that were stopped by virtue of what we learned through those programs. It’s still classified. I can’t give you the details of it without violating classification, but I can say there were a great many of them. The one that has been public was the potential attack coming out of Heathrow, when they were going to have several American planes with terrorists on board, with liquid explosives, and they were going to blow those planes up over the United States.

Now, that was intercepted and stopped, partly because of those programs that we put in place.

Now, I think part of the difficulty here as I look at what the Obama administration is doing, we made a decision after 9/11 that I think was crucial. We said this is a war. It’s not a law enforcement problem. Up until 9/11, it was treated as a law enforcement problem. You go find the bad guy, put him on trial, put him in jail. The FBI would go to Oklahoma City and find the identification tag off the truck and go find the guy that rented the truck and put him in jail.

Once you go into a wartime situation and it’s a strategic threat, then you use all of your assets to go after the enemy. You go after the state sponsors of terror, places where they’ve got sanctuary. You use your intelligence resources, your military resources, your financial resources, everything you can in order to shut down that terrorist threat against you.

When you go back to the law enforcement mode, which I sense is what they’re doing, closing Guantanamo and so forth, that they are very much giving up that center of attention and focus that’s required, and that concept of military threat that is essential if you’re going to successfully defend the nation against further attacks.

There was a time, you might vaguely recall, when the Bush administration was blamed for “not connecting the dots.”

If we get hit again, we will remember all President Obama did to stop collecting the dots.