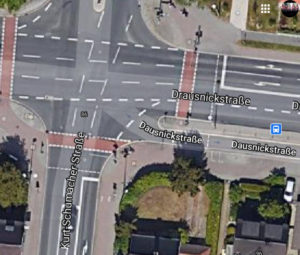 It started out as a quiet midnight shift. That changed when a Soldier turned east out of the Main Gate and headed our way. I was driving west in our clearly marked Military Police jeep.

“He hasn’t turned his headlights on,” Scott remarked.

I flashed my high beams a couple of times. The VW kept coming with its headlights off. There was no front license plate. The driver passed by us with his head turned our way and his mouth wide open. I checked my side mirror; there also was no plate on the rear of the car.

I thought to myself the Soldier was going to get somebody killed.

“Call it in,” I told Scott. “White male in uniform driving a Volkswagen Beetle, with no lights, passengers, or plates, travelling east on Artillerie Strasse.” (Artillery Street.)

He picked up the radio mike and started transmitting.

As the VW was quickly pulling away from us, I shifted into high gear and floored it. Army jeeps were built for war, not speed; at best, they would do 65 MPH. He was running and would likely lose us. But I hoped to get close enough to spot a decal or body damage, some distinguishing information. There were no bars opened at that hour nor military bases in the direction he was headed; he had to be headed home. We’d track him down.

The VW did not slow down at the stop sign as it made a left turn and headed north.

I turned on our blue flashing police light, down-shifted, slowed, and looked left as we neared that same corner. Nothing was coming.

“Clear right,” Scott called out, so I turned.

Seconds later we saw the VW pass under the blinking red traffic light at the main intersection one block ahead. It had slowed but did not stop.

A car travelling west on that main road slammed into it.

It struck the VW’s right-front fender, tipping the VW violently up onto its right wheels and spinning it rapidly counter-clockwise, 180 degrees around. It bounced back down onto all four tires and came to rest facing south in the middle of the intersection.

“Tell the Desk we need a German ambulance, ASAP, and a doctor, at Drausnick and Schumacher Strasse,” I said to Scott. (In Germany, doctors routinely accompanied ambulance crews to incidents when there was an immediate threat to life.)

The hospital was about a mile away.

I pulled into the intersection and stopped where vehicles could see our flashing blue light in all directions.

“Check the German, Jim,” I said. It was an Audi with German license plates, and it had come to rest on the bike path lane and sidewalk just past the northwest corner of the intersection.

I ran to the passenger side of the VW. The GI was leaning against the door. I opened it. He was unconscious and fell into my arms, so I pulled him the rest of the way out.

Blood from a deep 2-inch long gash in his temple shot skyward and was pumping out. He hadn’t worn his seatbelt. The force of the spin had thrown him to his right and his head struck the curved metal window frame just below the passenger side window. I applied a pressure bandage (we carried one in a pouch on our pistol belts), but blood kept pouring down my arm.

With my fingers, I probed around on his neck, found an artery, and applied pressure. The flow subsided, yet some still drained out and on to my bare hands.

PFC Scott ran back over to us and said, “The German is okay.”

“Shut off his ignition,” I said. It was SOP due to the potential for fire and an explosion.

Less than two minutes later I saw blue lights fast approaching from the west. An ambulance and German Police car came rolling in. My silent prayer had been answered.

Dr. Zimmerman, who I recognized from a previous accident, emerged and came to us.

“Don’t let go of him while I have a look,” she said sternly, in perfect English.

She removed my hand from the pressure dressing, quickly examined him, and then said, “I am going to do some surgery. You must keep pressure on the artery and hold him still.”

She went to work.

A minute or two later she announced, “You can remove your hand from his throat.” She had clamped the artery. Thankfully, I did not see much of the “surgery.”

She told the ambulance crew to take him. They soon sped off towards Erlangen’s hospital.

Investigating the incident was not at all difficult: We found a key in Craig’s car with ‘Impound lot’ printed on a tag attached to it. Whenever a GI’s privately owned vehicle’s registration expired, the car was supposed to be immediately moved to the impound lot on base.

The base’s SDO/SDNCO office maintained a key to the lot’s gate in case a GI’s car was towed in after normal duty hours. We finished at the accident scene. I washed up, changed uniforms, and we went there. We learned Craig walked to work that day from the apartment he shared with his wife just a few blocks north of the intersection where he later crashed. His VW’s registration expired before he could get the inoperable lights fixed. He had turned in its license plates to the vehicle registration office at the MP Station. Craig was on-duty that night as the Brigade’s Staff Duty Non-Commissioned Officer (the SDNCO in charge during off-duty hours). He told the Staff Duty Officer (SDO), a Lieutenant, there with him that he was going to run home and grab some food. Craig used the key and attempted to drive home in his unregistered and defective car.

Two days later, I visited Dr. Zimmerman at Erlangen’s University Medical Center. Craig went into cardiac arrest in the ambulance. They revived him. He had brain damage caused by his head striking the metal car door.

I asked if my action added to that damage. She replied, “If you hadn’t, he would have bled to death before we got there.”