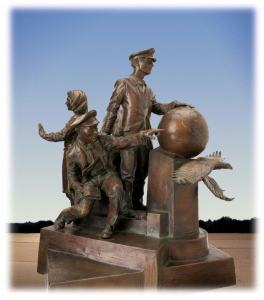 Nearly seven years after 19 Islamic jihadists took control of four commercial airliners with the intention of raining death and destruction on America, the flight crews who were first to die that day have finally been appropriately honored. The 9/11 Flight Crew Memorial dedication in Grapevine, Texas, host city to Dallas-Ft. Worth International Airport, took place on Independence Day.

What a fitting day to remember the 33 individuals who were the first First Responders and the only uniformed service members to confront the faces of evil up close, in hand-to-hand battle. From the pilots in the cockpit and the forward flight attendants who were attacked with folding knives and box cutters, to the crew members who alerted the world, to those who joined with passengers using whatever was at hand to mount a do-or-die resistance and successfully stopping the suicide killers from reaching the nation’s capital, these 33 men and women should be remembered for their bravery, dedication to duty, and shared humanity as they faced what they knew to be the last moments of their lives.

What is immediately noticeable about this glorious memorial is that it was entirely conceived and built by individuals who come from, or are closely connected to, the aviation community. Too often, memorials become mired in controversy because they stray too far from their intended purpose, which is to mark an historic event, honor the individuals whose lives shaped or were personally touched by that event, and to inspire those of us who live on, today and tomorrow, to lead our lives in a way that gives meaning to those values which we hold dear as a people.

Men and women for whom the attack on airplanes was deeply and intensely personal built this memorial. It was the vision of Valerie Thompson, an American Airlines flight attendant with 20 years seniority, for whom the 9/11 attacks were a call to action to build a permanent remembrance to her colleagues and to honor all those aviation professionals whose lives changed forever on September 11. Her husband, Dean Thompson, sculpted the one and a half life sized bronze figures adapted from an original design by Bryce Cameron Liston. The 18-foot structure is situated on the outskirts of Dallas-Ft. Worth International Airport where a steady flow of commercial jetliners in their final landing approach can be seen in the distance, adding a living reminder of what we lost and what continues to be an object of terrorist obsession.

“The captain stands at the highest point, his copilot to his right, as it is on the airplane. The captain is charged with the responsibility of protecting passengers, fellow crewmembers and the aircraft. The first officer is alert, his safety manual in hand, pointing to the western horizon, the intended destination of all four flights. Back-to-back placement of the flight attendants to the cockpit crew shows the teamwork of all flight crews, especially now – post 9/11.

“The young girl with her teddy bear represents the traveling public. She is the family on their big vacation, the newlyweds on honeymoon, the grandmother on her very first flight, the weary businessman and unfortunately now … she is the soldier off to war.

“The role best known by the general flying public is portrayed by the male flight attendant. He drapes a blanket around the small child. His duties show a commitment to passenger care and service. Indicative of her role as a safety professional, the female flight attendant stands in the protected position: her hand held in the International sign for “stop”, shielding her passenger from harm.”

It makes perfect sense that this memorial would not be an abstract work of art with its subject matter intentionally obscured, if not impossible to discern. Instead, it is a classical figurative rendering of the human beings who lived and died on that hellish day, people whose lives and deeds represent those essential virtues, which cannot be vanquished by force of steel and fire. This is a memorial composed of poignant images denoting courage, dedication and commitment, virtues that our forefathers and foremothers possessed more than two hundred thirty years ago at the birth of the nation, and which are indispensable to the effort of preserving our way of life generations into the future.

It is significant to me that this million-dollar memorial was entirely a grassroots effort, funded and built through the dollars of ordinary people, without the support of national endowments, political affiliations or government money.

As we go forward in this long war against a patient, determined enemy, it is comforting to know that Americans still know how to get things done when they are focused and determined, that they understand the importance of symbols which communicate our core values, and which bind us together from one generation to the next.

On Friday, just outside of Dallas/Ft Worth International Airport, the first national memorial to 9/11 heroes was dedicated. Shirley Hall, who is a Flight Attendant and the Vice President of the 9/11 Flight Crew Memorial Foundation, explained the memorial sculpture’s symbolism during the memorial’s July 4, 2008, dedication ceremony:

As volunteers on this project, we have each spent time describing this statue in our attempts to raise funds to turn Valerie’s dream into a reality. From Bryce Cameron Liston’s original interpretation to the final magnificent piece of art you see here today, each of us has shared our ideas on the symbolism of the statue.

The entire bronze sculpture and Texas limestone base sit centered on the North, South, East and West directional indicator known as the “Compass Rose.” A granite facing displays the flights and names of the crew.