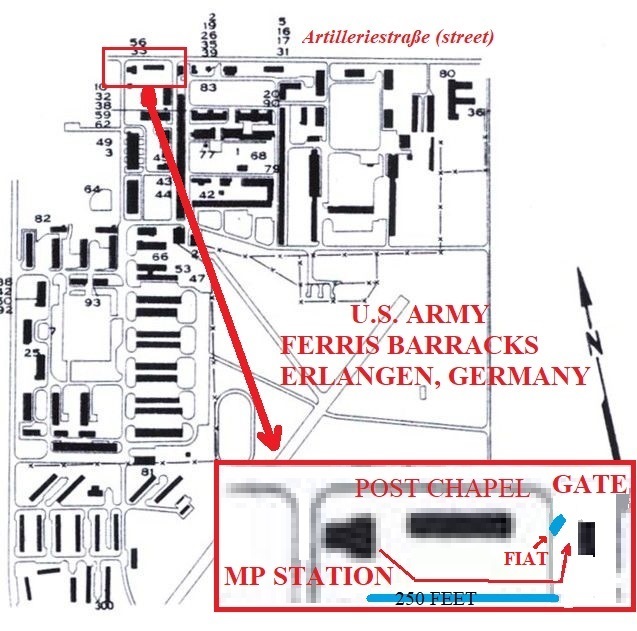 The two unarmed Unit Police (UP) soldiers called the Military Police (MP) Desk a block away and reported a “Blond-haired white male driving an older tan Fiat” had twice rolled slowly down the street outside and passed the Main Gate, staring hard at them. (The other gates were closed after midnight and MPs often checked IDs for suspects after major crimes. Criminals looked carefully before attempting to enter there.)

I perp-walked him through the MP station backdoor less than 3 minutes after I had left there and secured him in the detention cell. After unlocking the front door, I read him the standard legal rights warnings, which he waived. The collected evidence was damning. He confessed but then pled not guilty at his arraignment to charges of Rape and Assault with Intent to Commit Grievous Bodily Harm.

At noon, Sergeant First Class (SFC) “D.C.”, my Platoon Sergeant who was from North Carolina, flipped my mattress and me onto the barracks room floor.

Sergeant “W’s” court martial panel could have sentenced him to life in prison for raping a 16-year-old drunk German girl in that parking lot. Yet he came face-to-face with his own mortality and to rest facing God’s house that dark May night.

The defense cross-examined none of the prosecution witnesses – not one. The victim testified against him yet asked the jury to show mercy to her attacker, to not sentence him to life. She added that she would live, grow, find love, and dance again. There was not a dry eye in the courtroom – not one. He was the sole witness for the defense, read a statement expressing deep remorse to the girl, and then repeated his confession to the jury. The jury convicted and sentenced him to 6 years.

fiat (n.) 1630s, “authoritative sanction,” from Latin fiat “let it be done” (used in the opening of Medieval Latin proclamations and commands) … In English the word also sometimes is a reference to fiat lux “let there be light” in Genesis i.3. … Perhaps Sergeant W came to see the light that dark night north of Nuremberg.