I would like to briefly go through a chronology of the relevant events so as to explain the Department’s involvement in this matter. I think my first contact with the Rich case came in late 1999 when Jack Quinn, the former White House counsel, called me and asked me to facilitate a meeting with the prosecutors in the Southern District of New York concerning a client of his named Marc Rich. This was not an unusual request. Over the years other prominent members of the bar and former colleagues, Republicans and Democrats, had asked me to arrange similar meetings with other offices around the country — Mr. Rich’s name was unfamiliar to me.[emphasis added mine] …
I gained only a passing familiarity with the underlying facts of the Rich case. … [the link is to a copy of Eric Holder’s testimony as filed with the Federal Clearing House]

Yet, as Andrew McCarthy reported today on the National Review Online, Eric Holder filed a complaint against Clarendon Ltd in 1995:

On April 13, 1995, the Wall Street Journal reported Holder’s announcement that his office had obtained a settlement from a Swiss trading company called Clarendon Ltd. Rich had maintained a significant ownership interest in Clarendon, but the company had falsely represented to the government that none of its principals was disqualified from federal contracts. By concealing its link to Rich, Clarendon had induced the government to purchase its wares — coinage metal for the U.S. mint. When Holder’s office found out about Rich’s chicanery, it filed civil charges. The settlement of those charges, Holder told the Journal, ended a broader investigation his office had been conducting into Rich’s business interests.

On-air today, WOR talk-radio host Steve Malzberg discussed this with Debra Burlingame. During his nomination hearings last week before the Senate Judiciary Committee, Eric Holder again cited a lack of familarity with Marc Rich and the underlying facts of the case as what caused his “mistakes”:

Here is the complaint against Clarendon, beginning with the top of the first page: 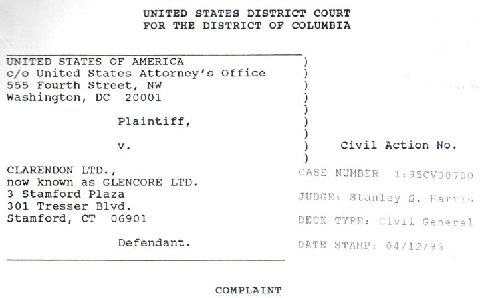 On page 2 of the complaint, Marc Rich was specifically named: 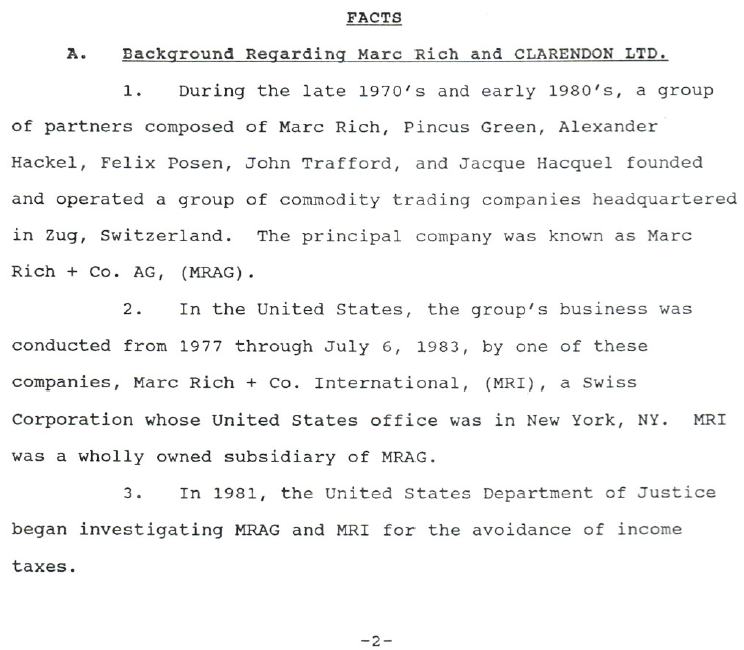 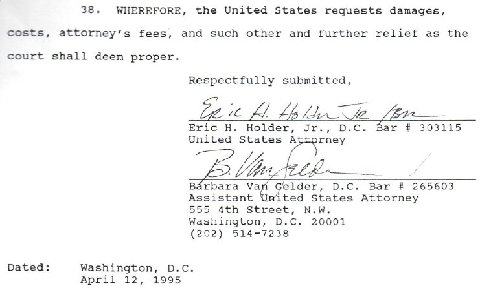 To summarize: In 1995, when he was an ambitious U.S. attorney in Washington, Eric Holder knew exactly who Marc Rich was. He was sufficiently outraged by Rich’s conduct that he had his office sue a Rich-controlled company that had duped the government into awarding it a lucrative contract while Rich remained a fugitive from justice. Holder then publicly filed a complaint which unmasked Rich’s duplicity in detail. Furthermore, Holder took credit in the press for inducing Rich’s company to pay Uncle Sam a $1.2 million settlement and to concede that it should have acknowledged “Rich’s substantial indirect ownership.”

Then in 1999, when he was deputy attorney general in the Clinton administration, Holder was approached to help Rich by Jack Quinn, Rich’s attorney and a confidant of Al Gore, who was at that time running for president. Holder was hopeful that Quinn would recommend him for attorney general in a Gore administration. Abandoning the approach he’d had his subordinates take with Rich in 1995, Holder in 1999 decided Rich wasn’t so bad after all. He tried to persuade the U.S. attorney in New York to meet with Quinn to discuss settling the fugitive’s case without jail time. When that didn’t work, he helped Quinn obtain a pardon for Rich—running interference so that prosecutors would not learn a pardon was under consideration—and conveyed to President Clinton that, as DOJ’s top spokesman, he favored clemency. (As he slyly phrased it, he was “neutral leaning in favor.”)