While nearly all of the more than 1200 memorandums for record summarizing the interviews conducted by the 9/11 Commission have been reviewed for classification, unfortunately three other key documents remain hidden — perhaps deliberately so as to avoid embarrassing officials — from the American people.

They are the 9/11 Commission’s: transcription of the ten Commissioners interviewing then President Bush and VP Cheney in the Oval Office in April 2004; 7000-word summary of a review of more than 300 related Presidential Daily Briefs to Presidents Clinton and Bush (43); and 78-page staff monograph on National Security Council work on counter-terrorism 1998 to 9/11.

Multiple FOIAs, declassification review requests, and appeals have been filed for them to no effect. We will keep trying.

By January 14, 2009, only 35% of the 9/11 Commission’s staff documents had been processed by the National Archives. They are Congressional records not subject to the Freedom of Information Act. There are nearly 2,000 memorandums for record (MFRs) of the summaries and transcripts of interviews conducted by 9/11 Commissioners and staff, as well as the briefings they received.

117 MFRs are still pending declassification review. Key interviews among them illustrate the 9/11 Commissioners’ lip service last week to transparency. They briefly called for declassification on page 39 of their 49-page “update” to their original 2004 recommendations:

“The job of fully informing the American people is incomplete, however. The commission’s records, including summaries of our interviews and important intelligence and policy documents, are held by the National Archives. Some of those documents and records remain classified and are thus unavailable to the public. Authority to declassify those documents rests with the agencies that created them.”

On July 21, 2004, 9/11 Commissioners met to decide when to release this body of work. Richard Ben-Veniste asked: “Is the theory here the great cover-up of partisan differences?” The notes of the meeting do not show he received an answer. Regardless, the vote was 6 to 3 to kick the responsibility 4 1/2 years down the road. [1]

What motivated Samuel “Sandy” Berger in 2004 to steal classified documents from the National Archives while he acted as former President Bill Clinton’s designated representative to the 9/11 Commission? The answer may be within the 9/11 Commission interviews of Richard Clarke, George Tenet, and Sandy Berger held by the National Security Counsel. [See correction at Note 4].

Surely the Commission asked former CIA Director Tenet what efforts were made to alert the NSC and President Clinton on the movement of al Qaeda operatives immediately preceding and following the Millennium terrorist attacks plots.

On January 15, 2000, two known al Qaeda operatives, future 9/11 hijackers Nawaf al-Hazmi and Khalid al-Mihdhar, arrived in Los Angeles. During December 1999, the CIA had tracked their movements in Southeast Asia, observed their meeting with Walid bin Attash (now at Guantanamo awaiting military commission trial alongside Khalid Sheikh Mohammed), and covertly photocopied the open-ended U.S. visas within their passports. Beginning in March 2000 and before September 11, 2001, more than 50 people at the CIA knew they had entered the United States.

The 9/11 Commission staff also prepared a 78-page monograph of NSC counterterrorism efforts from 1998 to 9/11. Yet the 9/11 Commissioners have never publicly spoken of its existence which is not classified. I filed for declassification review of it in 2009.

In addition, there is the still classified (by the FBI) 9/11 Commission interview of former FBI Director Louis Freeh. Subsequent to my April 2009 request, a previously unheard of staff monograph was declassified in June 2009. [2] It was prepared by staffer (and former DOJ IG) Barbara Grewe on the intelligence sharing “Wall.” It concluded: “Simply put, there was no legal reason why the information could not have been shared.” Indeed. A MFR declassified and released on January 15, 2009 of 9/11 Commission staff interviews of former Deputy Attorney General Jamie Gorelick states in part:

Strangely, the 9/11 Commissioners reminded no one that Executive Director Philip Zelikow and Commissioner Jamie Gorelick had authored a 7,000-word summary [3] of presidential daily briefs (PDBs). It is in former President George W. Bush’s records. It has been subject to declassification review by the NSC since January 20, 2014 as federal statute mandates a 5-year delay after a President leaves office. And there is the still classified MFR summarizing the President Bush-Vice President Cheney interview conducted by all 10 Commissioners.

Massive finger pointing as the WTC Pile, Pentagon, and a field outside of Shanksville still smoldered would have distracted key government personnel then scrambling to rally our Nation’s defense, and it would not well serve us now. Yet the American people must know the rest of the story. 2,978 names and the face of a 9/11 firefighter on a funeral mass card that I’ve long carried in my wallet haunt me; we owe it to them and future generations.

The 9/11 Commissioners can finally raise their voices and fulfill their charter to provide a “complete account of the circumstances surrounding the September 11, 2001 terrorist attacks, including preparedness.” I pray they do.

Note 2:
Legal Barriers to Information Sharing: The Erection of a Wall Between Intelligence and Law Enforcement Investigations
Commission on Terrorist Attacks Upon the United States
Staff Monograph
Barbara A. Grewe
Senior Counsel for Special Projects
August 20, 2004

Note 3: Zelikow confirmed its existence in a 2011 Reuters report.

Note 4: Tenet’s interview remains pending declassification review by the CIA while Clarke’s and Berger’s interviews are being held back by the NSC. 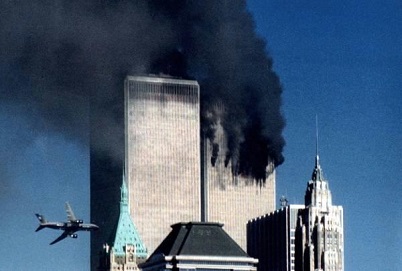 At 9:03 a.m., on 9/11, terrorists crashed United Airlines Flight 175 into the World Trade Center’s South Tower. Four minutes later, the FDNY’s Battalion 7 Chief, his aide, and five firefighters from Ladder 15 — led by my wife’s brother — arrived in that tower’s lobby. While a FDNY City-Wide Tour Commander set up the command post there, a Deputy Chief (4 Bravo) moved from there to Tower 2’s staging area at West and Liberty Streets and the Battalion 7 Chief attempted to establish communications with the Battalion 1 Chief at the command post in the North Tower.

Battalion 7, his aide, and the five members of Ladder 15 then used a working service elevator that they had found and proceeded to the 40th floor. Their mission was to reach the fire floor, report on the situation there, and begin to direct the deployment of the additional units. This initial audio is of those firefighters, beginning at 9:07 and running through approximately 9:19 a.m. [Note: I have removed the ‘open air’ (the periods when no transmissions were made), extraneous transmissions, and several actual calls from within the South Tower from these audio recordings]:

Once they all reached the 40th floor, they began the ascent, with each carrying 60 to 80 pounds of gear. While climbing, they received a report of a way to those trapped above the fire floor from the “Director of Morgan Stanley” whom is believed to have actually been Morgan Stanley’s head of security. Ladder 15 also received a report of another plane (probably while monitoring other radio channels). Additional units began arriving on the 40th floor. This audio runs from approximately 9:21 to 9:35 a.m.

.
They encountered the injured and directed them to the elevator. The following are brief excerpts from the New York Times’ Accounts from the South Tower, beginning on page 9, as published on May 26, 2002: [Also see this USAToday report, September 3, 2002.]

Judy Wein, survivor: Gigi [Singer] and Judy, along with a man she had never before met [Ed Nicholls, also of Aon, who is interviewed separately] headed into the stairs. One at a time they moved down. Judy moved quickly down the stairs, so fast that she left Gigi at times behind her, one or two flights. Gigi would yell out Judy’s name on occasion, Judy announcing the floor numbers as they went down, 60, 55, 53. It was somewhere in the 50s that they encountered the first firefighter, she said. They were moving in small packs, carrying a load of heavy equipment, which clearly slowed them down. She told them that there were many injured people on the 78th floor, please help them. And they continued up. They told her to keep going down to the 40th floor, where there was an elevator bank. Her legs were trembling by the time she got there. She encountered two security guards and a firefighter, they told her to calm down. Not to rush. Take her time. But Judy just wanted to get out. An elevator came. Within another 10 minutes, they were outside. She was in the ambulance. The door was closed. She heard a noise. She turned to look. The south tower was coming down.

Ling Young, survivor: At the 51st floor, she met two firemen, and one of them decided to go down with her. She wasn’t aware of the fact that he had joined her until they got to the 40th floor, when he told her they could take the service elevator the rest of the way. She got out to Church Street, where she was placed in an ambulance. Moments after the ambulance pulled away to take her to a hospital, the tower she had been in fell to the ground.

Ed Nicholls, survivor: “These two guys came over. They were trying to figure out, because the fire was getting so bad. We knew we had to get out of there.” “The fire was not too far from us. We were watching it burn. It was decided between these two guys, one of them said, `Lets go back over to the other side where they came from.’ He thought that might be the best way to get down.” The other guy said “No, I don’t think so, I think there is a stairway over here. At this point it was getting very smoky.” One of those men pointed to the stairwell. [Other accounts say this man was wearing a red handkerchief] This was to be the route to safety. “And then the three of us, myself, Gigi and Judy headed toward that stairwell and started to go down the stairs.”

They continued to climb, attempted to find an elevator that terminated below the fire, and relayed to each other what they saw and who they found. More firefighters came up on their radio channel and, along with at least one NYPD Emergency Services Unit, were coming up the stairs behind them to assist. This audio runs from 9:37 a.m. to 9:50 a.m., approximately:

They reached the fire floor, witnessed the devastation, fought fires, found the way to those trapped above, and called for more units. This audio begins about 9:52 a.m: 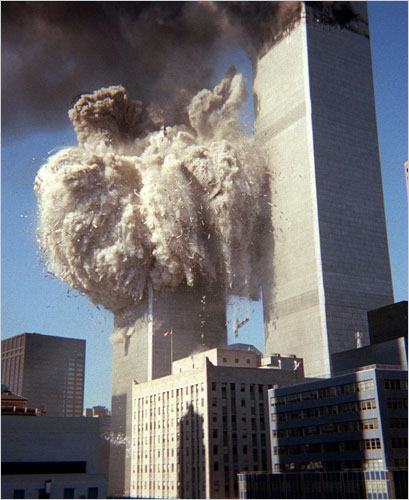 The audio went silent at 9:59 a.m., when the South Tower collapsed.

We will never forget.