By now nearly everyone has heard that Rosie O’Donnell has joined the other ignorant, lying, politically motivated, anti-Semites, or profiteering 9/11 conspiracy theorists. They imply or state outright that 9/11 was an “inside job” conducted by Zionists, by many members of our own government, or both. She offered her “theories” on a TV show named The View, saying, in part:

“I do believe that it defies physics that the World Trade Center tower 7, building 7, which collapsed in on itself, it is impossible for a building to fall the way it fell without explosives being used.”

She predicated that statement by sarcastically saying, “I do believe that it is the first time in history that fire has ever melted steel.” Beyond her obvious ignorance of how steel is made, the NIST report states the sustained fires were hot enough to weaken the steel within the badly damaged Towers 1 and 2 and did cause their collapse. In addition, Popular Mechanics has debunked the conspiracy theories at length and in detail.

In furtherance of Ms. O’Donnell’s education and while we await the NIST’s final report on WTC 7, I offer her this resource.

Protec Documentation Services, Inc, states they are, “the world’s most knowledgeable independent authorities on explosive demolition, having performed engineering studies, structural analysis, vibration/air overpressure monitoring and photographic services on well over 1,000 structure blasting events in more than 30 countries.” In October 2001, they briefly answered a series of questions concerning the 9/11 attacks upon the World Trade Center. Last year, their Director of Field Operations, Brent Blanchard, and a Protec team produced a scientific study of the collapses. Concerning WTC Tower 7, they said, in part:

Seismographs at Columbia University’s Lamont-Doherty Earth Observatory in Palisades, New York, recorded the collapses on WTC 1, 2 and 7. This data was later released to the public and currently appears on their website. Additionally, on 9/11 Protec field technicians were utilizing portable field seismographs to continuously record ground vibrations on several construction sites in Manhattan and Brooklyn for liability proposes.

In all cases where seismographs detected the collapses, waveform readings indicate a single, gradually ascending and descending level of ground vibrations during the event. At no point during 9/11 were sudden or independent vibration “spikes” documented by any seismograph, and we are unaware of any entity possessing such data.

This evidence makes a compelling argument against explosive demolition. The laws of physics dictate that any detonation powerful enough to defeat steel columns would have transferred excess energy through those columns into the ground, and would have certainly been detected by at least one of the monitors that were sensitive enough to record the structural collapses. However, a detailed analysis of all available data reveals no presence of any unusual or abnormal events.

Ms. O’Donnell can find Protec’s October 2001 answers and their detailed report by clicking on the image below or continue to profit from 9/11 and the dead while “entertaining” her information-challenged fans who applaud her every word. 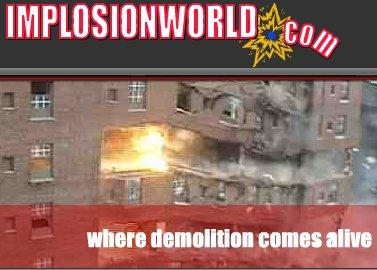 Update: I was remiss and failed to acknowledge our good friends at Cox&Forkum, particularly John’s caricature of Rosie O’Donnell and their alerting us to Jonah Goldberg’s pithy piece on her:

“For the record, fire can melt steel, and buildings collapse when heat weakens steel. But that misses the point. The point is we shouldn’t have to argue with crazy people.”

Point taken yet Ms. O’Donnell’s popularity unduly influences and, unanswered, her audience will remain blissfully unaware of the facts that contradict her.

While some intentionally deny it, Hitler’s Nazis did exterminate six million Jews during the Holocaust and the nineteen 9/11 hijackers were Muslims. And despite what you hear from an ignorant TV “star” and other assorted fools, the World Trade Center’s building 7 fell as a result of structural damage and fires caused by the collapse of the North Tower. The city decided to not place scores more FDNY firefighters at extreme risk after so many had already died that day.

Michelle Malkin wrote of more denial today in the New York Post and the danger it places us all in:

Here was the description of the school drill plan: “The exercise will simulate an attack by a fictitious radical group called Wackos Against Schools and Education who believe everyone should be homeschooled. Under the scenario, a bomb is placed on the bus and is detonated while the bus is traveling on Durham, causing the bus to land on its side and fill with smoke.”

Flabbergasting: In the wake of 9/11 and the jihadists’ carnage against schoolchildren in Beslan, Russia, the school chose to prepare their students for an attack by Christian homeschooling “wackos,” not Muslim suicide bombers.

How many other jihad-whitewashing mock terrorism drills have been conducted using tax dollars? How long before we mimic the British schools — where the Holocaust is being dropped from history lessons to avoid offending Muslim pupils?

American educators have been bending to the will of the grievance-mongers ever since the 9/11 attacks. Remember the jihad-sympathizing admonition included in the NEA’s touchy-feely, post-9/11 curriculum: “Do not suggest that any group is responsible” for the terrorist attacks, parents and teachers were advised.

But feel free to conjure up homeschooling “wackos” and Christian “New Crusaders” to avoid offending the Muslim lobby.

Not all Muslims are terrorists yet nearly all of the terrorists still trying to kill Americans are Muslims. That is the real world threat we face and the one we should prepare for.

Note: Michelle Malkin now also has a link up about whitewashing jihad in the schools here.