The National Review Online has posted a symposium of opinions as to whether Washington and this war can be saved after Congress’ vote to set timelines for withdrawal from Iraq and President Bush’s veto of the measure. William J. Bennett, Peter Brookes, Victor Davis Hanson, Clifford D. May, Mackubin Thomas Owens, Bill Roggio, Joseph Morrison Skelly, W. Thomas Smith Jr., Jim Talent, and I all commented there. Here is what I said plus a link:

Can this war be saved? Yes, but Republicans in Congress have to step up. Confident of Bush’s veto, they did not fight the supplemental bill hard enough, letting the Democrats’ repeated claim that the American people “support them” go unanswered.

Americans have a great deal of faith in our military. What they are not so sure about is the Iraqi people. According to a poll conducted last September, a strong majority of Iraqis support the Maliki government and trust the Iraqi security forces. When asked about their support for al Qaeda, an overwhelming majority of Shia (98 percent) and a large majority of Sunni (71 percent) firmly rejected al Qaeda and Osama bin Ladin. Increasingly, Iraqis know that foreign fighters are responsible for most of the bloodshed in their country, including attacks intended to provoke sectarian violence.

This is a p.r. war, both here and there. Americans need to be reassured that the Iraqis strongly support the U.S. mission of standing up the Iraqi army. General Petraeus called the unprecedented number of volunteers who are showing up for training a “stunning development.” Equally significant is the huge increase in intelligence from Iraqi civilians about insurgents and their activities. Americans will give the surge time, and accept casualties, if they know the Iraqis are not sitting out the fight.

This past week, a majority of House Democrats and nearly every New York City metropolitan area Democrat voted to allow CAIR and the ‘6 flying imams’ to sue the passengers who reported the latter’s suspicious behavior. I explain what happened on the House floor in my commentary this morning in the New York Post:

Why must Democrats constantly defend against charges that they can’t be trusted on issues of national security? Well, consider what went on in the House of Representatives last Wednesday night.

Various members of the House majority had just spent 30 minutes in self-praise over the $7.3 billion transportation-security bill, calling it long-overdue relief for millions of Americans. Then Rep. Peter King (R-L.I.) rose to propose an amendment directed at a dangerous new threat to national security.

His motion was a response to the “John Doe” lawsuit filed by six “Flying Imams.” Last November, the six were ejected from a US Airways flight after their fellow passengers reported what they saw as strange and disturbing behavior. The imams claim that they were victims of “intentional” and “malicious” discrimination and are seeking compensation, including punitive damages — from the airlines, and also from the passengers and crew, who are identified in the suit as “John Does” to be served with legal papers once a court order reveals their actual identities.

That lawsuit is a dangerous threat to a vital component of public-transit security — the public itself.

King explained as much, speaking on behalf of his amendment, which would protect anyone who makes a reasonable, good-faith report of suspicious activity from being the target of a lawsuit. “We have an enemy which is constantly adapting,” King said Wednesday. “We have to think outside the box.”

That enemy, of course is al Qaeda — which is obsessed with slaughtering innocents using public transportation. There was Madrid’s “3/11” — 10 bombs detonated on four trains at the height of the morning rush hour, killing 191 and injuring 2,050. And London’s “7/7”— four suicide bombers in the Underground and on a double-decker bus, resulting in 52 dead and 700 injured.

In New York City alone, 7 million people use mass transit every day. With 400 subway stations with 1,500 entrances, the trains are a “soft” target — one the NYPD can’t adequately protect without help from the public.

Every New York City rail and transit rider has seen the signs: “If you see something, say something.” The principle is obvious — in an age of terror, we should all have our eyes open. If the imams’ lawsuit prospers, how many people won’t say something — for fear of being sued?

Rep. Steve Pearce (R-N.M.), who’d offered an earlier bill to protect good Samaritans who alert officials, rose to speak after King. “If we allow these suits to go forward,” he warned the House, “it will have a chilling effect on the future of American security … If we are serious about fighting terrorism, if we are serious about protecting Americans and asking them to help protect each other, then we must pass this motion.”

This is the kind of no-brainer legislation that every member of Congress should vigorously support. Yet House Democrats reacted to King’s proposal as if he’d thrown a bomb into the House chamber itself.

According to witnesses in the gallery and on the floor, Speaker Nancy Pelosi displayed a classic deer-in-the headlights look as the Democratic leadership went into a huddle — plainly eager, not to embrace this common-sense measure, but to sidetrack it.

Meanwhile, Rep. Bennie Thompson (D-Miss.), the chairman of the Homeland Security Committee, took the floor to oppose King’s motion —- and to defend the lawsuit against John Does. “We should be tolerant,” he argued; people shouldn’t be singled out because they “look different.”

In fact, the flying imams triggered concerns by a variety of unusual actions, as well as words that roused the concern of another Arabic-speaking passenger. Witnesses say that House members started booing Thompson.

Finally, a member of the leadership realized how this would look to Americans watching on C-SPAN: Rep. Rahm Emanuel (D-Ill.) was seen staring at Thompson and repeatedly drawing his hand across his throat — an urgent signal to get off the floor.

With Democrats realizing they couldn’t argue against King’s measure, it went to a vote, and passed, 304 to 121. 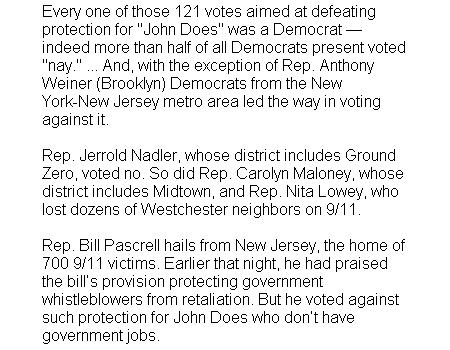 The story isn’t over yet. To become law, this measure must also pass the Senate — and survive House-Senate conference, where the leadership might try to quietly excise King’s reform.

The Council on American-Islamic Relations (CAIR) will certainly push for that. After all, the radical “civil rights” group — which supports the terrorists of Hamas and has received millions in funding from Saudi Arabia — is paying the lawyers in the “Flying Imams” lawsuit.

Nihad Awad, CAIR’s executive director, defends the suit’s targeting of ordinary citizens. The clerics, he explains, will only sue passengers who made false reports or acted in bad faith. But the suit cites an “elderly couple” who watched the imams in the gate area and then made a cellphone call. How will CAIR determine who the couple called and whether anything they did was intended to discriminate against the imams, without first finding out their names and forcing them to defend against the charge? What about their civil rights?

In the future, who will be willing to risk their savings in the face a potential lawsuit underwritten by wealthy Middle Eastern donors?

If King’s measure becomes law, that worry will vanish. But the bill will have to survive the instinct of Congress’ Democratic leadership to pander to political correctness and CAIR’s special-interest pressure.

Democrats who don’t want to be branded as soft on national security should remember the image of Rahm Emanuel on the House floor, drawing his hand across his neck.

(1) On the same day, March 13, 2007, CAIR met in the US Capitol meeting room Congressman Bill Pacrell had arranged for them, the 6 imams announced (at a nearby CAIR press conference) their lawsuit against US Airways and the “John Doe” passengers aboard Flight 300.

(2) Debra Burlingame is the sister of Charles F. “Chic” Burlingame, pilot of American Airlines flight 77, which was hijacked and crashed at the Pentagon on 9/11. She is also a former flight attendant and lawyer, currently a Director of the World Trade Center Memorial Foundation, and a co-founder of 9/11 Families for a Safe & Strong America.