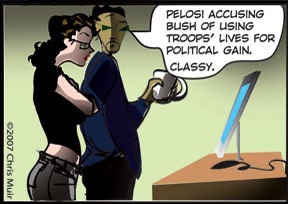 Here is an interesting commentary by Kevin McCullough:

The spokesbabe for CAIR, Rabiah Ahmed (pronounced: Hock-mad) said, “I saw ’24’ on Monday and we do have concerns for the show. We are monitoring it and will be contacting FOX to discuss those concerns. We like a good show and a good drama. But as an advocacy group, we have to consider the image and interest of our community.”

I’m sorry Ms. Ahmed, what community is it that you refer to?

Would that be the same community that danced in the streets of the middle east, as well as Jersey City, New Jersey, and suburban Michigan when 3,000 Americans were killed ruthlessly by practioners of Islam on September 11? Would that be the community that in the aftermath of those attacks, as well as the ones in the South Pacific, London, Madrid, Tel Aviv, Jordan, and a dozen more have steadfastly refused to renounce the personalities and practices of those leading the Islamic Jihad against the west?

Of course CAIR has an impossible mission. They are charged with defending a religious system whose very sacred text instructs faithful practitioners to sever heads and limbs of infidels. I can only imagine the self conflict every one of the CAIR employees must face on a daily basis. Because to be truly American they must alter at least part of their faith practice – to deny a part of its historical instruction. And thus to be fully Muslim they must choose to deny a part of what being an American is, respecting the differences of others.

Also see SNL on Islamophobia, redux and Stranger Than Fiction.